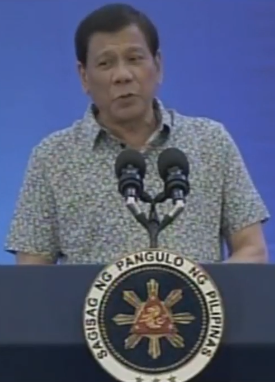 President Rodrigo Duterte had a phone conversation with Chinese President Xi Jinping at the "behest" of United States President Donald Trump. Duterte revealed this during his speech in Davao City on Thursday. He said when Trump called him up last Saturday night, the US leader asked him to seek Xi's intervention regarding the problem in the Korean Peninsula due to North Korea's series of ballistic missile tests. He said Trump told him "if President Xi Jinping could do something about the situation regarding Kim Jong-un (of North Korea)." "So I called (up) President Xi Jinping. I am calling you but the behest of President of the United States, President Trump," Duterte said. "And we all agreed in the Asean, and even President Trump that you can do something...actually, the biggest contribution of all other is your intervention," he  said of what he told Xi in their phone conversation on Wednesday afternoon. Duterte said he could not publicly share yet Xi's reply because he has to convey it first to Trump. "President Trump has not called me yet but if he will call me how did it go, what transpired, I would tell him. But definitely, we’re getting the held of everybody here," he said. The US has recently deployed its aircraft carrier near the Korean Peninsula amid the situation in the area. (Celerina Monte/DMS)