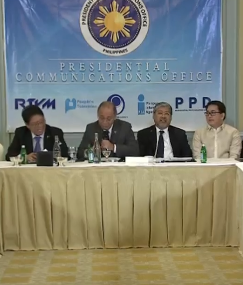 President Rodrigo Duterte had witnessed the signing of several business-to-business agreements, with an estimated total cost of $925 million from his state visits in the three Middle Eastern countries, government officials said on Sunday.
This as the Philippines and Qatar signed four agreements, including one which will allow Filipino doctors and other health professionals to study and practice the profession in Qatar and vice versa, and an investment deal, which will pave the way for the $1 billion fund facility for investment activities.
In a joint press conference in Doha, Qatar where Duterte was on the last leg of his three-nation trip to the Gulf States, Presidential Spokesperson Ernesto Abella said the business deals are "expected to create approximately 26,000 jobs."
The agreements were on top of the government-to-government pacts signed during Duterte's weeklong visits to Saudi Arabia, Bahrain and Qatar, he said.
In Qatar, prior to the signing of the agreements of the two countries, Acting Foreign Affairs Secretary Enrique Manalo said Duterte and his counterpart, Emir Sheikh Hamad bin Khalifa Al Thani, would witness the inking of the health cooperation and investment agreements, and memorandum of understanding on the field of culture and MOU for cooperation in the field of technical, vocational, education and training.
Health Secretary Paulyn Jean Ubial said it took 10 years before the two countries agreed to finally sign the health deal.
"There was a lot of exchanges and legal review. But finally when I came to Qatar last January, the new minister committed to signing the cooperation on all important fields of health," she said.
Aside from support of joint activities with international health organizations such as the World Health Organization and Gulf Cooperation Council, she said the agreement also focuses on areas of research, exchange of expertise, scientists and other health professionals.
She said it was only last month that Qatar recognized the "reciprocity principles," which will allow Filipino doctors and other health professionals to study and practice in Qatar, the same way that the Qataris could also come to the Philippines to do the same.
She noted that a group of Philippine Business Council in Qatar would be establishing polyclinic and a Filipino hospital with 100 bed capacity in the said country to cater to the Filipinos as well as to other nationals there.
In the area of investment, Trade and Industry Secretary Ramon Lopez said that it took nine years to finally reach the agreement, which provides basic rights and guarantees of investors.
Because of such agreement, "on top of the $925 million dollars new business-to-business (deals), there will be $1 billion dollar fund, it's a facility for investment activities," he said.
Manalo said the MOU in the field of culture aims to reinforce cultural programs, including musical, theatrical and artistic groups, exhibitions and translations of literary works between the two countries.
MOU in the field of technical, vocational, education and training, on the other hand, encourages technology programs between private enterprises and exchanges of professionals in technical areas, he said.
Duterte is expected to arrive in Manila at around 3:30am on Monday from Qatar. (Celerina Monte/DMS)