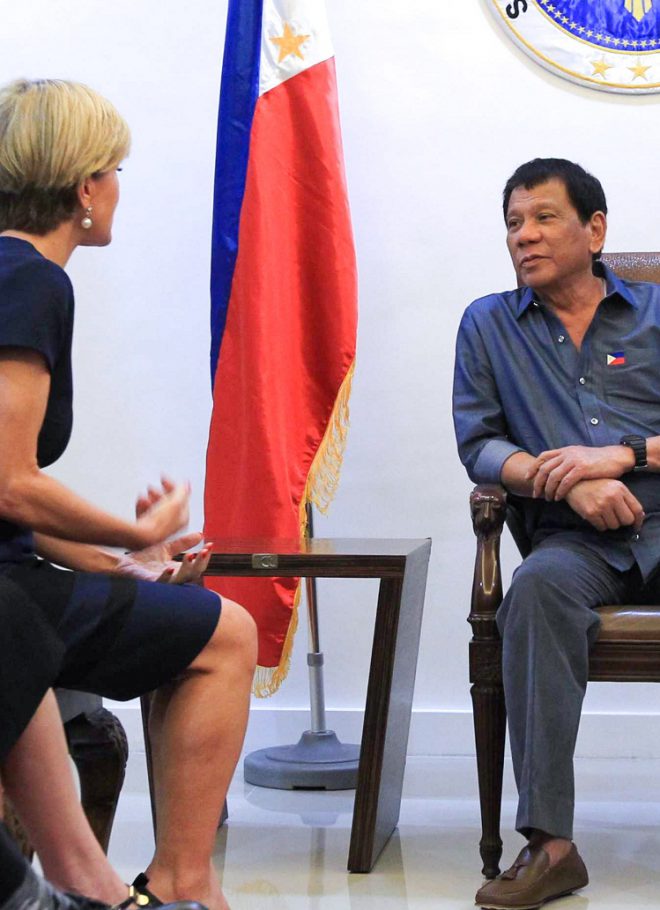 President Rodrigo Duterte sought on Friday Australia's assistance in exercising responsible mining in the Philippines. Duterte received visiting Australian Foreign Minister Julie Bishop in Davao City. "PRRD (Duterte) expressed Philippine interest in learning responsible mining from Australia citing that country's experience and expertise," said Presidential Spokesperson Ernesto Abella in a statement. In turn, Bishop expressed Australia's willingness to cooperate in building capacities for "responsibility mineral and energy resources," he said. The Department of Environment and Natural Resources has recently ordered the closure of 23 mining projects, suspension of five others, and cancellation of 75 mineral production sharing agreement for violation of mining laws and for being on the watershed areas. The mining industry has been opposing nomination of Gina Lopez as DENR secretary. Abella said Australia vowed to extend $40 million over six years for the peace process in Mindanao. The fund will go to to projects, such as improved water facilities, in conflict-affected areas, he said. Bishop also expressed support for the Philippine chairmanship of the Association of Southeast Asian Nations. Abella said Duterte assured the Australian official that the Philippines will do its utmost for a "strengthened" ASEAN and a region that is peaceful, progressive and prosperous. Bishop, in a forum in Makati City on Thursday, urged that the Philippines, being the chair of ASEAN this year, should lead the region in speaking with one voice in order for it to be a strong force. She has urged ASEAN to make the July 2016 award by the arbitral tribunal on the Philippines be the basis of the Code of Conduct of Parties in the South China Sea that ASEAN and China have been working on. Abella said Duterte and Bishop underscored that terrorism and violent extremism are serious threats, with both expressing readiness to identify areas of collaboration. Both sides stressed the need to address piracy at sea and to ensure that maritime areas are safe and secure and allow for freedom of navigation and overflight, Abella added. He said the meeting between Duterte and Bishop was a very warm and cordial, reaffirming the long-standing ties between the two countries. "It sets the tone for a more positive engagement between the two countries as strategic partners," he said. (Celerina Monte/DMS)