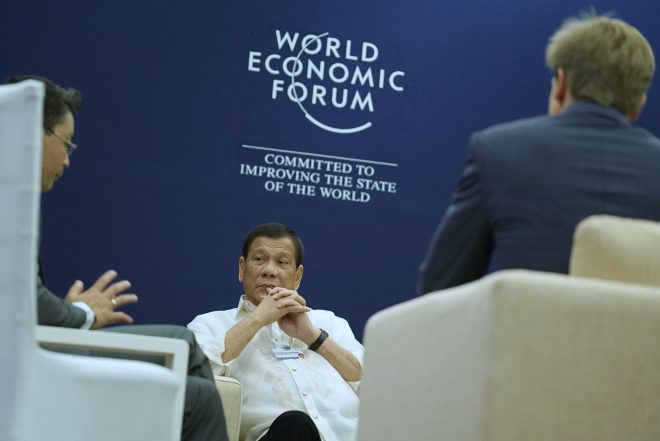 President Rodrigo Duterte urged on Thursday decision-makers from different sectors attending the World Economic Forum on ASEAN in Cambodia to take a committed stand against the scourge of illegal drugs. In his speech, Duterte stressed the need not to allow people, particularly the youths, to be victims of illicit drugs. "The ASEAN youth are among best and the most creative, intelligent and innovative in the world. We must empower them to be the best versions of themselves," he said. "But we cannot turn a blind eye on the scourge of illegal drugs that threatens our youth and the future of our societies. We need to take a committed stand to dismantle and destroy the illegal drugs trade apparatus," Duterte said. "We must reaffirm our commitment to realize a drug-free ASEAN community." Since he assumed office last year, Duterte declared an all-out war against illegal drugs. But his bloody war on drugs has drawn criticisms from human rights advocates due to the alleged extrajudicial killings of those suspected of involved in illegal drugs. United Nations Special Rapporteur on extrajudicial killings Agnes Callamard has also expressed interest to conduct a fact-funding mission in the Philippines on the issue. But Duterte set conditions, such as engaging her in a public debate. Callamard refused to accept the conditions as these were against the parameters of her work. But Callamard visited the Philippines last week to attend a policy forum on illegal drugs, drawing criticism from the Philippine government. Incoming Foreign Affairs Secretary Alan Peter Cayetano hit Callamard for already "prejudging" what has been happening in the Philippines. Cayetano, who is still a senator until his appointment is accepted by a bicameral commission, questioned her expertise in extrajudicial killings and forced disappearance as well as on illegal drugs, saying these were not her expertise. "Dr. Callamard has already has something on her mind of what has been happening here, she's against already. She sees these as killings. And by the way, extrajudicial killings, forced disappearance, abductions are not Dr. Callamard's expertise," Cayetano said. He said he was surprised when he learned about this when he joined the Philippine mission to the Human Rights Council (HRC) in Geneva recently. He said Callamard was teaching in Columbia University but "that’s not what her focus was on. It was on government accountability, communications, et cetera. And most especially, she's not expert on drugs." Cayetano said how could Callamard come to the Philippines and has findings that drug has no bad effect.. He said the Philippine government told the UN anybody could come to the Philippines for as long as the person is "independent and fair," not like Callamard who has an ideology on human rights. "Their ideology is based on the belief that (the possession of) drugs need to be decriminalize, particularly the possession for personal use," he said. (Celerina Monte/DMS)