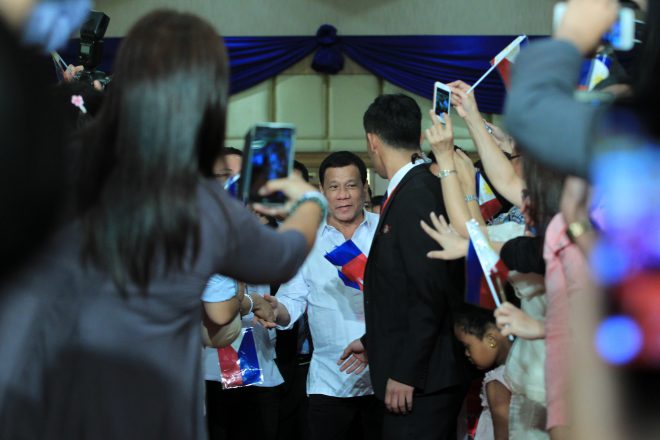 Duterte spells out conditions to resume talks with Reds

President Rodrigo Duterte reiterated his conditions before resuming peace talks with communist rebels, including the release of their captive government troops. In a speech before the Filipino community in Myanmar on Sunday night, Duterte said the Communist Party of the Philippines-New People's Army-National Democratic Front should agree first on a bilateral ceasefire "that is reduced in writing so that we can establish the parameters." Duterte earlier terminated negotiations after skirmishes between government troops and the NPA despite their respective ceasefires in February. On the statement of the rebel group that the government troopers were entering their "territory," he belittled the rebels’ claim. "I own the entire Philippines, representing the Republic of the Philippines. I won't allow you to have your own territory. Those are all mine, not yours. It's not for you to claim. It is my office that would say where lies the boundary of my country," Duterte said. He also asked the Maoist group to release all soldiers, policemen, civilians and local officials who remain as their captives. The president also told the rebels to stop their extortion activities. "Otherwise, we will be at war. We have been at it for 50 years. Do you want another 50 years?," he said. Earlier, Presidential Adviser on the Peace Process Jesus Dureza said the government and the NDF, the political wing of the CPP-NPA, have agreed to resume formal peace process next month. A source from the leftist group said before resuming talks on April 4, there was an agreement that the soldiers and policemen who have been held captives by the rebels would be released in exchange of four detained NDF consultants and 19 elderly political prisoners. In an interview with ANC, National Democratic Front senior adviser Luis Jalandoni said the communist party and New People’s Army said there are “seven who are captives of the New People’s Army.” "To promote the peace negotiations, the CPP-NPA leadership has declared that they are ready to release these prisoners of war as soon as possible," Jalandoni told ANC. A source from the government refused to confirm nor deny the agreement, saying "(I) can't disclose because if there is premature publicity, it may raise expectations." Duterte admitted many years ago, he was "an apostle" of Jose Maria Sison, the founding chairman of CPP, and was "full of idealism." He used to be Sison's student. "But when you grow up, when you have your own family, then you see the reality of it all, what is true to your country. You stop in indulging in ideals alone. You have to let reality sink inside your… gray matter between your ears. That's the truth," he said. With Duterte's conditions, it is not sure if talks will resume by April if the rebels fail to reply positively. (Celerina Monte/DMS)