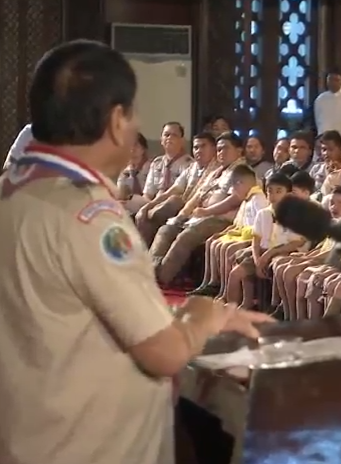 Duterte stops self from saying bad words in front of children

President Rodrigo Duterte prevented himself on Monday from saying bad words. The reason: the members of his audience are mostly young boys who belong to the Boy Scouts of the Philippines. "I will not say bad words," Duterte said in his speech during the Baden Powell Day (Founder's Day) of World Scout Organization of the Scout Movement and Investiture Ceremony of the Boy Scouts of the Philippines in Malacanang. But while he did not say bad words, Duterte said he is "ready to kill people" for the youth and for the country. "We protect you from the scourge of drugs. We protect you from exploitation and we're saying, right now, I'm angry, I will kill people if you touch the youth," Duterte said. In his speech, Duterte underscored the importance of making the Reserve Officers Training Corps as mandatory. He urged the boy scouts that when they grow up, they will take up ROTC and train how to handle gun to fight enemies of the state instead of being into drugs or into troubles. He also encouraged them to enter the Philippine Military Academy so they can become soldiers. Duterte said the military needs more pilots who will man the air assets and Navy personnel. (Celerina Monte/DMS)