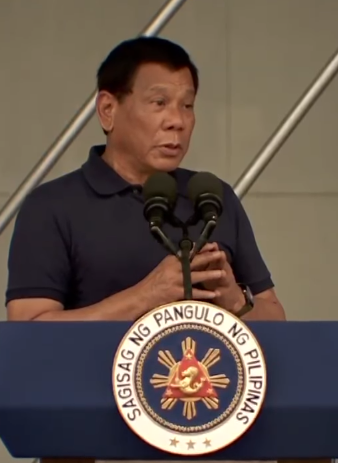 President Rodrigo Duterte on Sunday said he told the Armed Forces of the Philippines to hunt and kill all the remaining terrorists who went to Bohol. In a speech at the opening of Palarong Pambansa 2017 in Antique, Duterte said he told the military to not fall asleep and keep hunting the remaining terrorists who went to Bohol. "I want them dead. Don't give it to me alive," Duterte said. He even compared them to animals and told them he can also be the same. "They're animals. But if you want me to be an animal, I'm used to it. We're just the same. I can dish out, go down to what you can (do), 50 times over. I can eat you in front of me. Just give me vinegar and salt. I will eat you," Duterte said. "It's real, You make me mad? Give me a terrorist. Give me salt and vinegar. I will eat his liver," he added. He said terrorism is one of the Philippines’ problem and it would have been heaven if there were no terrorists. "Those terrorist, they cut other people's throats, slit it .Just decapitate," Duterte added. Duterte even warned terrorists to not force him to declare martial law because it will be a very sad day in the Mindanao. "Do not force me, because when I declare Martial Law in Mindanao, I will end all the problems. Whether it is really terrorism or land boundary or family feud, I will end it. Everything, I will not leave a single problem. Even the slightest," Duterte said. (Ella Dionisio/DMS)   .