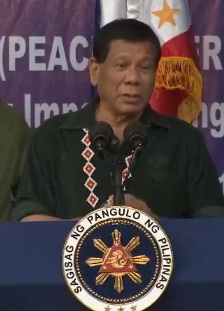 Duterte tells NPA to stop extortion if to resume talks

President Rodrigo Duterte reiterated on Thursday his demand to communist rebels to stop extortion if they want peace talks to resume. In an interview in Bukidnon, Duterte said the "revolutionary tax" being collected by the New People's Army is "plain extortion. "And if they want to continue, to resume the talks, one of the things that I would demand would really be that they stop the extortion activities," Duterte said. Earlier, Labor Secretary Silvestre Bello III said the government would hold informal talks with the National Democratic Front, the political wing of the Communist Party of the Philippines-NPA, in July before possibly resuming the stalled 5th round of formal peace talks in August. But Duterte said, "I refuse now to resume the talks with them until they stop extortion." He said the people might say they were paying taxes and yet the government could not protect them from the NPA’s extortion activities. (Celerina Monte/DMS)