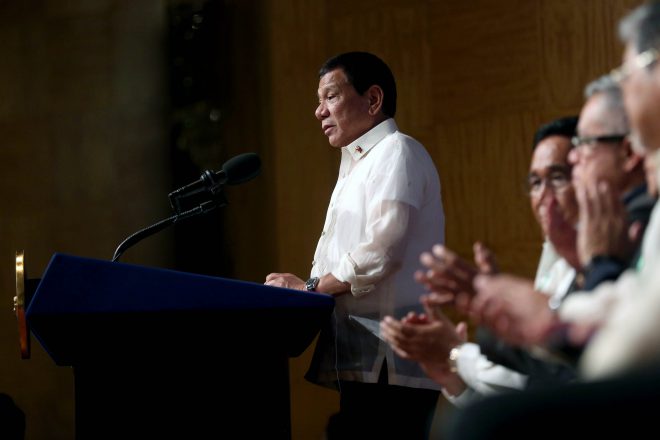 President Rodrigo Duterte said he is thankful to China for improving trade deals with Philippines in Hong Kong a speech in Saturday. Speaking before overseas Filipino workers before heading to Beijing for the Belt and Road Forum,  Duterte said he is thankful to President Xi Jinping for the invitation and sees the forum as an opportunity to boost economic ties with China. Duterte said he will not bring up the disputed islands issue in the forum. “I will not bring this up at this point in time because it could not be proper since I am here as a guest”, Duterte said. He said he will put aside the matter for the meantime and focus on export deals. Duterte said exports to China have improved into $2 billion. Banana exports are in full swing while pineapple exports stopped for a short period but is back to normal. ”We are a country which is agriculturally based and one of our strongest point would really be export of agricultural products.” Duterte said. In Beijing, Philippine Ambassador to China Jose Santiago Sta. Romana said increased exports of bananas and pineapples is a sign of the better relations between the two countries. “If you go around Beijing right now , and if you go to the markets, you will see the Philippine bananas. The Chinese are eating Philippine bananas again, and Philippine pineapples,” Sta Romana said in a press briefing. “They have promised to buy over $1 billion worth of tropical fruits from the Philippines and they are interested to buy more,” Sta. Romana added. Philippine banana exports dropped  in the past partly due to tighter quarantine since the 2012 standoff at the Scarborough Shoal. Before the Scarborough incident, China imported 300,000 bananas worth $60 million, according to the Bureau of Plant Industry. (Alanna Ambi/DMS)