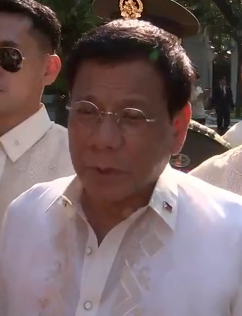 President Rodrigo Duterte said on Friday he would look into reports regarding a secret detention cell in a police station in Manila used by officers there to allegedly extort money from the detainees. "I will look into this," Duterte told reporters in Malacanang. He said he would call up Philippine National Police chief Director General Ronald dela Rosa. A team from the Commission on Human Rights Thursday night  made a surprise visit at the Manila Police District Station 1 and discovered a hidden cell behind a shelf where over a dozen people had been detained. Some detainees, who were not facing any charges, claimed policemen were trying to extort money from them in exchange for their release, a news report said. National Capital Region Police Office Director Oscar Albayalde has ordered the relief of MDP Station 1 commander Superintendent Robert Domingo. Presidential Spokesperson Ernesto Abella commended Albayalde for "acting decisively" and ordering Domingo's administrative relief and for directing the Regional Internal Affairs Service to conduct an investigation. "The report of the investigation will be forthcoming, and only then do we release further comment on the matter," he said. (Celerina Monte/DMS)