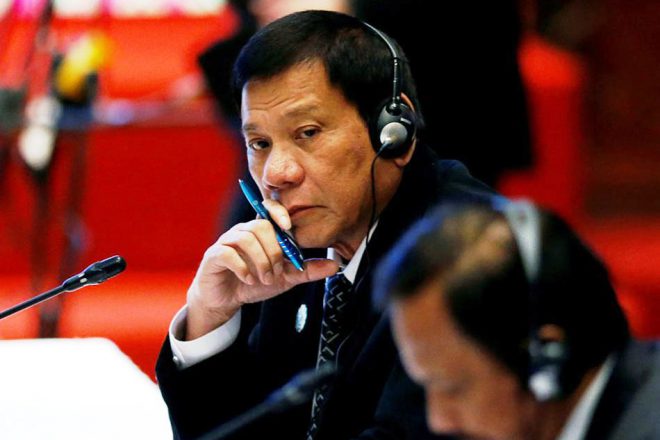 President Rodrigo Duterte is set to go to Myanmar and Thailand later this week as part of his "introductory visits" to southeast Asian countries. In a press briefing in Malacanang, Foreign Affairs spokesman Charles Jose said Duterte will be on official visits to Myanmar on March 19 to 20, and in Thailand on March 20 to 22. Myanmar and Thailand are the only two remaining countries in the region the president has not yet visited. Duterte briefly visited Thailand in November last year to pay respects to King Bhumibol Adulyadej, who passed away. Duterte, who was invited by Myanmar President  Htin Kyaw, will have a bilateral meeting with his counterpart. Duterte is also scheduled to meet other high-level government officials, including State Counsellor and Foreign Minister Daw Aung San Suu Kyi and Commander-in-Chief of Defense Services, Senior General Min Aung Hlaing. He will also meet with the Filipino community in Myanmar to apprise them of his administration's programs and developments in the Philippines. Myanmar is home to approximately 1,800 Filipinos. Philippines-Myanmar diplomatic relations are over 60 years old with ties formally established in 1956. The country's embassy in Rangoon, now Yangon, was opened in 1958. Myanmar is also a member of the Association of Southeast Asian Nations (ASEAN), joining the group in 1997 when the organization celebrated its 30th anniversary. In Thailand, Duterte and Thai Prime Minister General Prayut Chan-o-cha are scheduled to hold a bilateral meeting where they are expected to discuss issues of mutual concern, including political, economic, agriculture, energy, education, and defense cooperation, Jose said. Jose said agreements are expected to be signed between Manila and Bangkok. "Mostly, they’ll be in the areas of agriculture, in science and technology, energy, and I think education. But, these agreements are still being finalized," he said. Diplomatic relations between the Philippines and Thailand were formally established in June 1949. The president is also scheduled to meet the more than 16,000 Filipinos living and working in Thailand. (Celerina Monte/DMS)