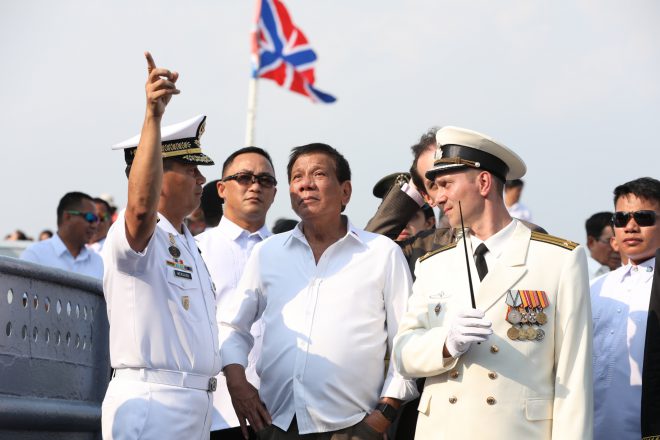 President Rodrigo Duterte boarded on Friday the Russian guided missile cruiser "Varyag" anchored in the Port of Manila. Duterte, accompanied by National Security Adviser Hermogenes Esperon and Acting Foreign Affairs Secretary Enrique Manalo, toured the ship. "The Russians are with me, I shall not be afraid," said Duterte as he was joined by the Russians during the photo opportunity. A Malacanang statement said Duterte first went to the upper deck where the short-range anti-missile rocket system is placed. He also went to the bow where the ship's main weapon, the long distance anti-ship missile and anti-aircraft carrier are located. Duterte also went to the ship’s museum as well as the admiral's room to sign the guest book. Duterte is set to visit Moscow next month upon the invitation of Russian President Vladimir Putin. He first met Putin in November at the sidelines of the Asia Pacific Economic Cooperation Summit in Lima, Peru. Duterte earlier said he wants to forge closer ties with Russia and China. In January, Duterte visited the Russian anti-submarine ship Admiral Tributs, which also anchored in the country for a goodwill visit. (Celerina Monte/DMS)