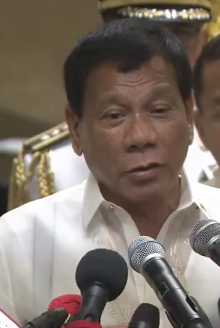 Duterte unfazed by complaint filed against him before ICC

President Rodrigo Duterte shrugged off on Thursday the complaint filed against him by a Filipino lawyer before the International Criminal Court. In an interview with reporters in Malacanang, Duterte said he would not even waste his time reading the 77-page complaint lawyer Jude Sabio filed against him before the Hague-based court. "Let them be. I cannot do anything. Nobody can stop from filing you (a case). I can even invent one and go to the fiscal's office now and accuse you for entering into three marriages," said Duterte, a lawyer. He said his staff gave him a copy of the complaint. But he said, "why would I waste my time? If I go to prison, then so be it." Duterte was even joking asked where he could be imprisoned. Asked if the ICC has jurisdiction on the case, he said, "I don't know. I haven't talked to any lawyer." But Duterte explained under the Revised Penal Code of the Philippines, there is so-called "territoriality" in prosecuting a case. "You can only be prosecuted in the country where you committed the crime. Do you know that? What are the features of our criminal system? One is territoriality," Duterte said. Sabio, the lawyer of Edgar Matobato, a self-confessed assassin who claimed to be part of the Davao Death Squad, which Duterte allegedly organized when he was mayor of the city, accused the president of violating the Rome Statute for committing crimes against humanity due to thousands of people who were killed in relation to the government's war on illegal drugs. In the same interview, Duterte hit the New York Times, which came out with an editorial "Let the World Condemn Duterte" based on Sabio's complaint before the ICC. "We'll, it's about time that their publication also must stop," he said. He even accused the New York Times of not criticizing the United States' "own mistake," which includes invasion of other countries. "Invading a country, making up excuses before the world that is not true, then you have the gall to say stop. You better stop your publishing," Duterte said. The New York Times editorial said Duterte "is a man who must be stopped." (Celerina Monte/DMS)