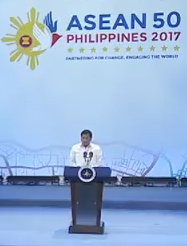 Duterte urges US to be prudent, patient in dealing with North Korea

President Rodrigo Duterte urged on Saturday the United States to be "prudent and patient" in dealing with North Korea, the two countries whom he described have been "playing with their dangerous toys." In a press conference at the end of the 30th Association of Southeast Asian Nations in Pasay City, Duterte said he was expecting a call from US President Donald Trump on Saturday night. During his conversation with Trump, he said he would not ask his US counterpart to stop on whatever decision he would make as far as the issue with North Korea is concerned. "But I would just say, 'Mr. President, please see to it that there's no war because my region will suffer immensely'," he said. Duterte said if the war breaks out, the first fallout would be East Asia. "There seems to be two countries playing with their toys and those toys are not really to entertain. We have to caution everybody, inlcuding those who would give advice to the power players because they have the nuclear warheads, to just show restraint and it behooves upon America, who has the bigger stick to just really be prudent and patient," he said. Duterte admitted that countries in the region, including the 10-member countries of the ASEAN, are worried about the situation in the North Korean Peninsula. North Korea again test-fired ballistic missile on Saturday. But the recent test appeared to have failed again. Pyongyang missile tests in the past weeks prompted the US to send USS Carl Vinson aircraft carrier to the waters near the Korean Peninsula where it started conducting exercises with the South Korean navy. According to Duterte, his statement as chairman of the ASEAN this year, contains concern about what has been happening in the Korean Peninsula. Duterte said it would be better not to engage North Korean President Kim Jong-un's playing of dangerous toys. "The guy simply wants to end the world, that's why he's very happy. He wants to finish everything. They will drag us down," he said. (Celerina Monte/DMS)