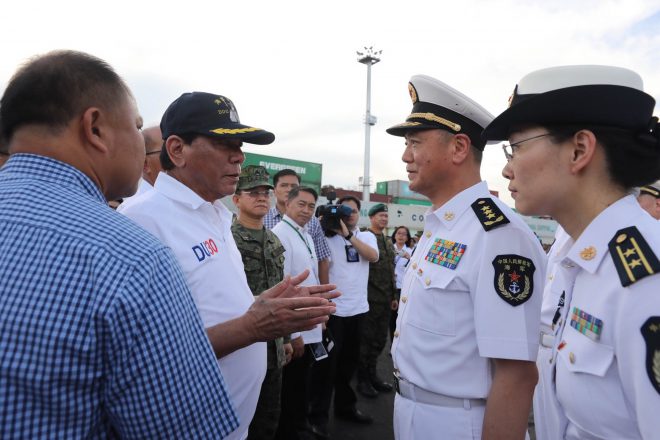 President Rodrigo Duterte said on Monday Philippine Navy could conduct joint exercises with China in southern Philippine waters. This, as Duterte boarded a Chinese warship docked in Sasa Port in Davao City. "Very impressive. It's clean and even carpeting, it's all carpeted inside and it's like a hotel actually," Duterte said after his tour in the Chinese People's Liberation Army Navy guided missile destroyer Chang Chun. He said the goodwill visit of the three Chinese warships, including Chang Chun, would only be the start of military cooperation between two countries. "Yes, part really of the building of --- confidence building and goodwill and to show that we are friends. That’s why I welcomed them here and I was the one who asked, ‘you show me your warships’," Duterte said, noting he saw an "array of arms" inside the ship. "It's all covered. But it's run by a computer and look at the way the missile launchers are pointed at us. It will be lowered at little on the angle, all of us here will explode," Duterte added. Asked if there was a possibility for joint military exercises between the two countries, he said, "yes, I said, I agree. We can have a joint exercise here in Mindanao, may be in the Sulu Sea." Duterte earlier said he hoped Chinese vessels could patrol in southern Philippine waters where piracy has been rampant. During the previous administration, the Philippines and China were engaged in tense territorial dispute over the South China Sea. The administration of then President Benigno Aquino III even filed a petition before the United Nations Arbitral Tribunal against China's claim in almost the entire South China Sea, including those within the Philippines' 200 nautical mile exclusive economic zone. The arbitral tribunal ruled in favor of the Philippines in July last year. But China, which did not participate in the arbitration case, has been rejecting the ruling of The Hague-based Permanent Court of Arbitration. When Duterte assumed the presidency, he decided to take a softer stance with China. Duterte, in the same interview, said it would "not be good" to fight with China. "It would not be good because any violence now would result only in both sides losing. There is no winner actually," he said. But while Duterte did not want to pick a fight with China, he said the construction activities in Pag-asa Island in Kalayaan, Palawan will push through despite China's opposition. He said the government would just repair the facilities in Pag-asa, which China has also been claiming. "Yes, of course, because that is part of our duty as nation," he said when asked if the repair in the facilities in Pag-asa will push through. "Well, they (China) can always look the way around. We have been there since 1974 by the way," he added. China has said any activity of the Philippines in Pag-asa and other areas in South China Sea would be illegal. (Celerina Monte/DMS)