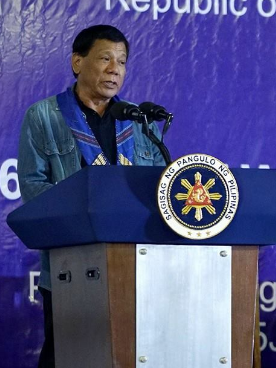 President Rodrigo Duterte said he would make sure those who beheaded the two Vietnamese seafarers would be punished. In a speech Wednesday in Hagonoy, Davao del Sur, he said he has to explain to Vietnam the beheading of its two nationals by the extremist Abu Sayyaf Group. "Did you see one they recently beheaded? Two Vietnamese they took three months ago. Their necks were cut off. Now I’ll have to explain to the Vietnamese. A head lying there. This one was put on his back," he said. "You’d use (God’s) name in killing another person. Well, we won’t be shortchanged there. You cut off a head and I’ll eat your liver if you want," Duterte said. He wondered what the Abu Sayyaf really wanted to prove. "What are you really trying to prove? And you say you have a god? You take --- you take the name of Allah in vain?," he said. On Wednesday, two decapitated bodies of two Vietnamese sailors were found by members of the local community of Brgy.Tumahubong, Sumisip, Basilan province. The bodies were identified as Hoang Thong and Hoang Va Hai, both among the six kidnapped crew members of the MV Royal16 Vietnamese cargo vessel in November last year. (Celerina Monte/DMS)