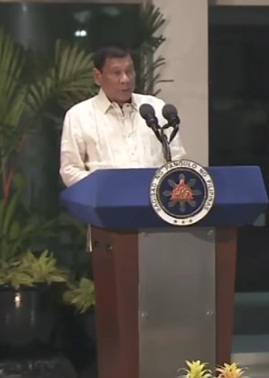 President Rodrigo Duterte, who is pushing for the postponement of the barangay elections anew, said on Thursday he would seek the help of the Church in appointing new officials of the villages. Duterte did not want the barangay polls in October because of narco-politics, a situation where politics is allegedly being run by drug money. "I said it's quite a bit messy...we are looking for a way to appoint the barangay captains," Duterte said, claiming 40 percent of the barangay captains are into drugs. Since the power to appoint is with the president, Duterte said he might seek a "compromise with the Church and everybody" by nominating three people. But the Philippine Drug Enforcement Agency, the police and military have to assure that these nominees have no connections with the rebels, not into drugs, and not the leaders of politicians. "If you can have that (at) least, I would be happy to just coming from the Roman Catholic from the Islam group, the Jehovah Witnesses. It’s not actually interference in the preference of the character that should be there," he said. He said it could not be construed as interference from the Church. Under the Constitution, there is separation of Church and State. "So we can do away with shady character," Duterte said. Congress has to pass a new law to postpone the barangay elections. Last year,  barangay polls did not push through for the same reason of narco-politics. (Celerina Monte/DMS)