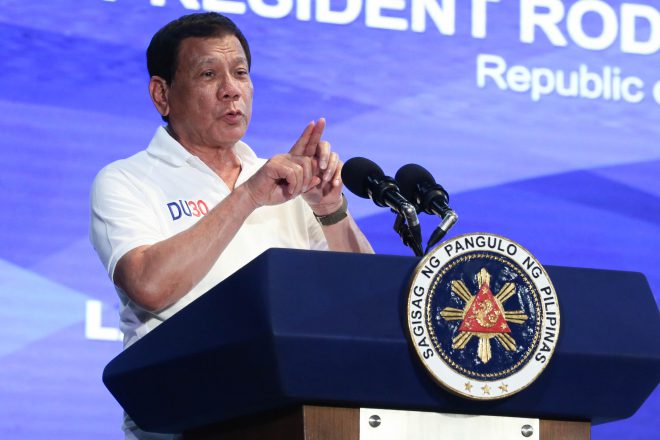 President Rodrigo Duterte warned he would ask  people to occupy government lands now in the hands of the "oligarchs" who are not paying the correct taxes. In his Labor Day speech on Monday night in Davao City, Duterte said he would "ask Filipino people to occupy the lands" if the private firms or individuals failed to return the properties "within the next three months." "So within the next three months, I will tell the owners or those people claiming the government lands that you are not paying your taxes amounting to billions and you are using the lands of the government. It was unclear how you got that. If you won’t return the lands to the government, then I will ask the Filipino people to occupy the lands that are in your hands. That's Makati, Pasay. You may find a nice place there," he said. Duterte previously granted to the members of militant group Kadamay some 6,000 housing units in Pandi, Bulacan they occupied.  The housing units were supposedly for the policemen and soldiers. But to prevent chaos, Duterte has said he would give housing units to the militants as he has vowed to build new projects, which are bigger and with complete amenities, for the men in uniform. In a press briefing, Presidential Spokesperson Ernesto Abella said Duterte's warning to the oligarchs was a "conditional statement." He explained what Duterte was "stressing is the seriousness of the matter that government property needs to be returned." (Celerina Monte/DMS)