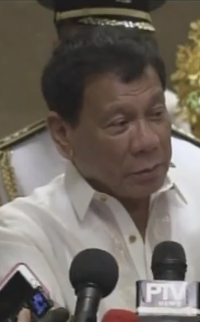 President Rodrigo Duterte threatened on Thursday to block the renewal of franchise of ABS-CBN television network, a media outfit whom he considered as critical of him and his administration. In an interview in Malacanang, Duterte said he would file a complaint against the Lopez-owned TV station for estafa and swindling. He recalled the company did not return payment for a supposed advertisement his camp placed when he was campaigning for the 2016 elections, but ABS-CBN, Duterte added, received payment. Under the law, Congress grants the franchise of a television or radio station. ABS-CBN's 25-year franchise expires on March 30, 2020 when Duterte is still the president. Asked if he would block the renewal of ABS-CBN's franchise, the president said, "Yes." He explained a franchise could only be granted if "you adhere to journalistic standard." "If you're like that, you're engaged in swindling-- for all we know-- there were some companies that you've not shown (the ads). If you operate, ABS-CBN, then you will only fool the people, you will engage in swindling. I have to stop you," he said. Duterte has been critical also of the Philippine Daily Inquirer for allegedly "slanting" stories against him. Celerina Monte/DMS