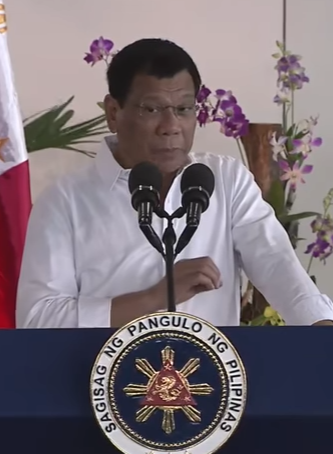 Duterte: We can’t stop China from its plan to build radar station

President Rodrigo Duterte admitted that the country cannot stop China’s plan to install an environmental monitoring station in the disputed Scarborough Shoal. “We cannot stop China from doing this thing; they were not even stop by the Americans,” Duterte said in a press conference Sunday at the  Davao City International Airport before leaving for an official visit to Myanmar and Thailand. Duterte also reiterated the Philippines cannot afford to fight China on the territorial issues at the South China Sea. “What do you want me to do, what do you want sir? What will I do? Declare war against China? I can’t. (I) will all lose our military and policemen tomorrow…We cannot assert even a single sentence of any provision…,” Duterte added. Duterte’s statements came a few days after Chinese Vice Premier Wang Yang and top Chinese officials paid a courtesy call in Davao City.  The visit also came following new concerns raised by defense and foreign affairs’ officials over the presence of Chinese vessel at Benham Rise, located 250 kilometers off the Philippines’ northeastern coast. Duterte said the government is allowing Chinese ships and even Russian ships as part of “right of passage.” He also emphasized the contribution of China on the improvement of the Philippine economy. “We are now improving the economy with the help of China,” said Duterte. But Duterte said there will be a time that the country will invoke the ruling of the permanent court of arbitration. “I will not invoke the arbitral ruling now, but there will be a time in my term when I will bring the issue back on the table on the four square of the arbitral ruling and it will come when they shall stand to tinker the entitlement,” Duterte said. Last Friday, Chinese media reported China’s plan to build an environmental monitoring station in Scarborough Shoal in West Philippine Sea. China is to begin preparatory work for installing the station within the year. Senior Associate Justice Antonio Carpio has warned China may impose an air defense zone and control the whole South China Sea if the Philippines will not stop its plan to build a radar station in the disputed Scarborough Shoal. Carpio was reacting to reports of Beijing’s plan to install an environmental monitoring station at the shoal, which is 124 nautical miles off Palawan’s northwestern coast. “A radar station on Scarborough Shoal will immediately complete China's radar coverage of the entire South China Sea. China can then impose an ADIZ or air defense identification zone in the South China Sea,” said Carpio, a member of the Philippine legal team during the arbitration proceedings against China in The Hague, Netherlands. (Robina Asido/DMS)