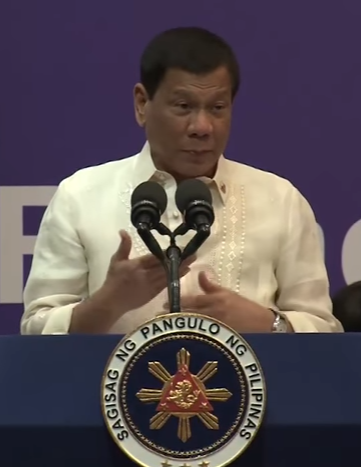 Duterte will not proceed to Pagasa, admits China persuaded him

President Rodrigo Duterte has withdrawn his plan to visit an island in the disputed South China Sea and raise the Philippine flag there in deference to China. In a speech before the Filipino community in Saudi Arabia on Wednesday, Duterte admitted China asked him not to proceed with his trip to Pagasa at the Kalayaan Island Group in Palawan on June 12 during the celebration of the Philippines’ independence from Spain. "China said, well in the meantime, do not go there, just do not go there please," he said. "China said what will happen if every head of state will go there to claim. They said what if every head of state of the contending parties there around the west Philippine Sea, they call it the China Sea...will go there to plant their flags. There’ll be likely trouble," he said. Duterte said because he values the Philippines' "friendship" with China, he would not push through with his plan to go Pagasa. "So, I am officially putting on notice China and the rest...so because of our friendship with China and because we value your friendship, we will not, I will not go there to raise the Philippine flag," he said. But he said he might send his son there "just to show that our claim is really good for all generations of Filipinos." Duterte, during his visit to a military camp in Puerto Princesa City, Palawan recently, ordered the military to occupy all nine islets in the Kalayaan Island Group and raise the Philippine flag. He also announced his intention to go to Pagasa on June 12. Duterte said relations between the Philippines and China have improved. He said exports of bananas and pineapples to China have increased. "So now we are good and I would like to preserve that goodwill between the Philippines and China. It has benefitted us in so many ways that life is almost good already," he said. (Celerina Monte/DMS)