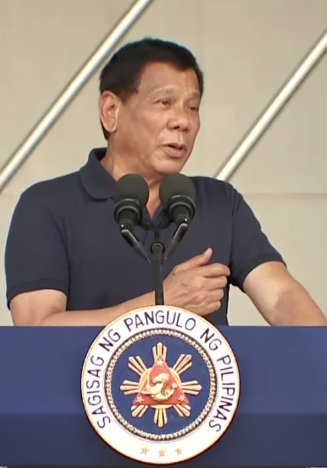 Duterte working on restoring ROTC, urges youths to be patriotic

President Rodrigo Duterte on Sunday said he is working on a law that will restore the Reserve Officer Training Corps, or ROTC. "I'm here to announce it, that I'm working on a law that will restore the Reserve Officer Training Corps," President Duterte said during the opening of Palarong Pambansa 2017 in Antique province. He told the students to go back to ROTC so he can be assured the next generation will know how to fight in case  a violent scenario occurs. "I can be assured that the next generation or now, at least you know how to hold a gun, know how to maneuver or climb a rope and you know how to defend your country," he said. He asked them to be patriotic and don't depend on other countries to survive. "Who else would defend you?  You’ll risk, ask for America? They will not die for you. You should be the one to die for your country. That is a message from a father to his nation," Duterte said. "Learn everything on how to love your country and how to serve if needed," he added. Duterte announced on February he was reviving the ROTC program. ROTC became optional in 2002 after President Gloria Macapagal Arroyo signed the National Service Training Program into law. Duterte said education gets the biggest share in his P3.35 trillion national budget for 2017. "This moment belongs to you, this is yours. I just wanted to say something, short but one, is that you must be by now must have sense of responsibility and while we are spending, you are the biggest this time," Duterte said. Duterte said during his cabinet meeting, it was unanimously decided education will have the biggest budget. He said he is trying to build competitiveness, fairness, values and a sense of good will to every children. "That is my sacred duty to transfer to you the values which we hold very, very dear to us," he said. The Department of Education got P544 billion from P443 billion in 2016. (Ella Dionisio/DMS)