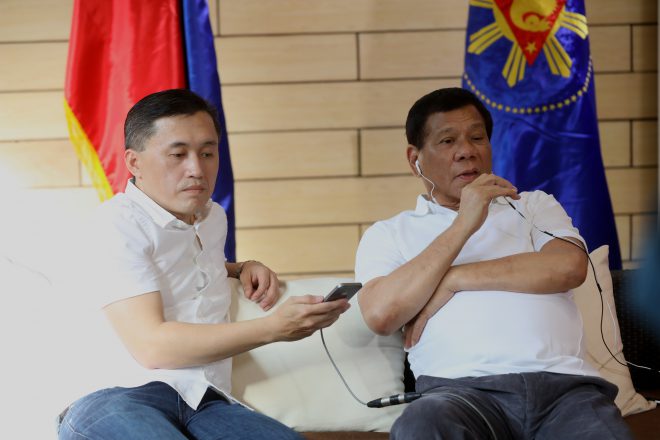 President Rodrigo Duterte and Chinese President Xi Jinping exchanged views about regional developments, including the recently concluded 30th Association of Southeast Asian Nations (ASEAN) Summit and the situation in the Korean Peninsula, during their phone conversation on Wednesday. Department of Foreign Affairs spokesman Robespierre Bolivar described the phone conversation of the two leaders as "very cordial." "They exchanged views about regional developments and how some concerns can be addressed," Bolivar said in a statement. A source said it was Xi who called up Duterte around 4pm. The phone conversation lasted for 26 minutes, the source added. Bolivar said Duterte shared with Xi Philippine positions on several salient issues, especially on developments in the Korean Peninsula, and he referred to "China's important role in promoting peace on the Korean Peninsula." In his capacity as chair of ASEAN, Bolivar said Duterte spoke about "how to further strengthen ties with ASEAN's dialogue partners and shared the outcomes of the recently concluded successful ASEAN Summit." He added that as chair of ASEAN, the regional bloc discussed and agreed on measures to promote ASEAN unity, centrality and solidarity as well as their commitment to continue promoting peace and stability in the Asia Pacific region. The Philippines recently hosted the 30th ASEAN Summit in Pasay City. Duterte, who is the current chairman of ASEAN, has been criticized for not including in his chairman's statement the ruling of The Hague-based Permanent Court of Arbitration favoring the Philippines and invalidating China's historic rights over the South China Sea and China's militarization in the disputed waters. In a Malacanang photo release showing Duterte having a phone conversation with Xi, it said Duterte thanked the Chinese for inviting him to tour the People's Liberation Army Navy flagship destroyer Chang Chun, which docked at the Sasa Port in Davao City recently. (Celerina Monte/DMS)