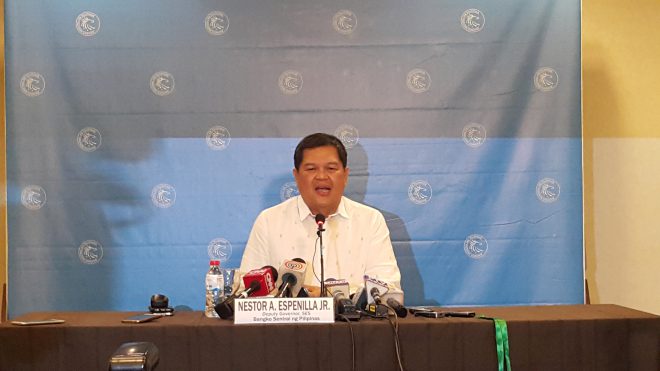 Espenilla admits he has “very big shoes to fill up” as central bank chief; vows continuity

Incoming Bangko Sentral ng Pilipinas Governor Nestor Espenilla Jr. admitted on Tuesday he has "very big shoes to fill up" when he assumed the post as the agency's top man. Espenilla will replace Amando Tetangco Jr, serving his second term as the BSP head and is considered as one of the world's best central bankers. Tetangco will retire in July. "Those are very big shoes to fill up," Espenilla said in a press conference a day after Malacanang announced his appointment. But he said it would not be hard for him since he has been part of Tetangco's team. "I've been part, it's like basketball team or a volleyball team. So our captain is graduating. I've been part of that team. So I'm changing roles within the team. But the essential team is intact. The BSP has been developed over the years to be professional and capable work force. I will be leveraging on that," Espenilla explained. "So, it's not like I have to reinvent everything. So I think that's one strong factor that's going to make me sleep better at night, because there's a strong BSP team to work with," he added. Espenilla said he was only told of his appointment on Monday when he was asked to go to Malacanang. Duterte never interviewed him. Espenilla said there will be continuity of policies when he assumes the post as head of the central bank. "I would characterize it as continuity...continuing what we have been doing in our constant surveillance of the monetary and financial system to make sure that it is resilient and stable. At the same time, we have increasingly strengthened our commitment to promoting financial inclusion, to create a financial system where no one gets left behind and when there is a strong protection of financial consumers. We are also deeply committed to protecting the integrity of the financial system against criminal elements. So this will be the defining elements of my term as a governor of the Bangko Sentral," he said. From the monetary policy perspective, he said the central bank would adhere to the inflation targeting approach, which has worked very well for the Philippines. Espenilla said the BSP will continue to push for its "ambitious legislative agenda that is essential towards achieving our goals." Among important bills that he hopes Congress would pass are the pending amendment to the BSP Charter, initiative to relax deposits secrecy, expand the coverage of the Anti-Money Laundering Law to include casinos, and the initiative to get a Proper Payment System Act. "These are some of the very important pieces of legislation that we need to work with Congress to enact them so that they'll be able to increase the effectiveness of our oversight over the financial system," he added. (Celerina Monte/DMS)