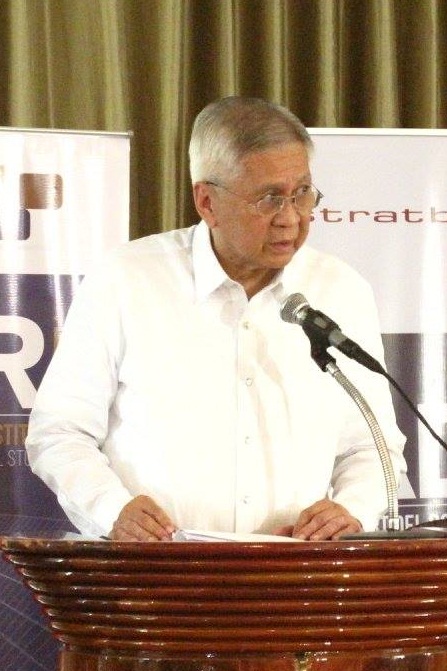 President Rodrigo Duterte, chairman of the Association of Southeast Asian Nations this year, should exercise his leadership to assert the ruling of the United Nations Arbitral Tribunal over the South China Sea against China, former Foreign Affairs Secretary Albert del Rosario said on Tuesday. Other Filipino experts as well as a foreign diplomat urged the member-countries of the ASEAN to act as one against China's activities in the disputed waters. "We cannot wait for a 'better time' to come - we must create that time ourselves less that opportunity be lost forever," Del Rosario said during the Stratbase ADR Institute (ADRi) Forum in Makati City. Del Rosario is the chairman of Stratbase ADRi. "Beyond island-building and militarization, if our fishermen cannot enter Scarborough Shoal, if we cannot develop new energy resources, if the marine commons is irreparably destroyed-and if our own Secretary of Defense cannot fly over the West Philippine Sea without being challenged, our country must speak out and must work with our neighbors and with our friends for us to stand united in protest," del Rosario said. The Chinese authorities recently warned the Philippine C-130 aircraft carrying Defense Secretary Delfin Lorenzana, along with the top military officials, when flying over the South China Sea while on its way to Pag-asa Island, in Kalayaan, Palawan. China also claims Kalayaan. Del Rosario said the Philippines and other Southeast Asian claimant countries in the South China Sea must not accept the position the build-up in the disputed waters by China is "a fait accompli that renders us helpless." Duterte previously declared he would set aside for the meantime the 2016 ruling of the Permanent Court of Arbitration favoring the Philippine petition to invalidate China's nine-dash line in the South China Sea. He said he would only raise to China the PCA ruling at the right time, specifically when it started exploring the seabed within the Philippine 200-nautical miles exclusive economic zone. Del Rosario was foreign affairs secretary when the administration of former President Benigno Aquino III questioned China's nine-dash line before the arbitral tribunal. Del Rosario said the PCA ruling should be an integral part of the Code of Conduct (COC) framework being finalized and the eventual COC. ASEAN and China have been working for a COC framework, which they hope to complete within the year. Del Rosario hit China for not exercising restraint from the activities in the South China Sea since 2002 when ASEAN and China came out with a non-binding agreement over how all claimant countries should behave in the South China Sea. "I am sorry to say that in the years that followed, one country did not exercise the necessary restraint expected of it. In 20017, as in 2012, the greatest immediate source of regional uncertainty has been China's unlawful efforts to expand its footprints throughout the South China Sea," Del Rosario said. "While most states strive for a peaceful, rules-based regional order in Southeast Asia, Beijing's unilateralism has put this common vision at grave risk. ASEAN must be untied in countering this challenge to its regional centrality and solidarity. I believe that promoting the rule of law and strengthening multilateralism in support of the law must be key parts of ASEAN's response," he said. Del Rosario said the Philippines must exercise its leadership by making sure that the agenda that it would push with the ASEAN is "exactly what it wanted to be and not dictated by China." Richard Heydarian, a foreign policy analyst, in the same forum, urged the ASEAN to come out first with a legally binding COC in the South China Sea before including China. He expressed belief that reaching a legally binding COC could "take forever" if ASEAN would include China. "Why not ASEAN themselves, four claimant countries, at least the active claimant countries (to come up with) COC first and pressure China later on to sign up," he said. Other ASEAN claimant countries are Brunei, Malaysia and Vietnam. As the Philippines chairs the ASEAN, he shared Del Rosario's position that it is "one major privilege" to set the agenda. "We may not get what we want, but we can decide what will be discussed in the ASEAN agenda," Heydarian said. Heydarian said Duterte, in his statement particularly in November when the ASEAN Summit and Related Summits would be held, he could say whatever he wants and "that is also working in our benefit if we use that opportunity in the right way." The Philippines will host the 30th ASEAN Summit on April 29 and another summit and Related Summits in November. The Related Summits would include dialogue partners, such as China, Japan, South Korea, and United States, among others. A foreign diplomat, who refused to be named, said he has yet to see ASEAN coming out with a united position in relation to the PCA ruling. "It might be advantageous for the Philippines to make use of the untied position of ASEAN to forward its position on South China Sea, which (the) Philippines has already achieved through the PCA ruling," the diplomat said. Jay Batongbacal, director of the University of the Philippines Institute for Maritime Affairs and Law of the Sea, expressed belief if ASEAN unites against China "it's formidable force even though China is much larger" than any of the ASEAN countries. "ASEAN has still a good number of people and they basically surround China's backdoors. So China will I think feel constrained to give way to some of ASEAN's demand if they unite," he explained. (Celerina Monte/DMS)