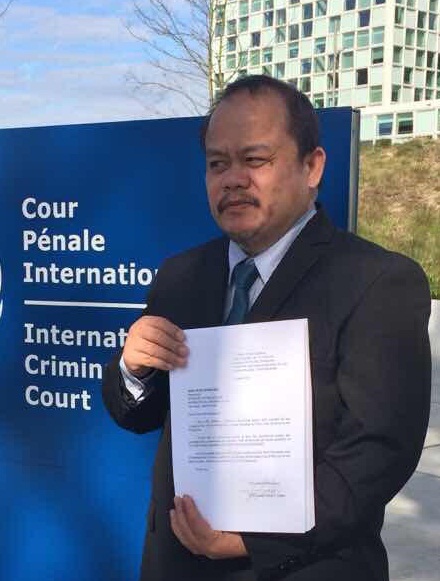 A Filipino lawyer filed on Monday before the International Criminal Court a complaint against President Rodrigo Duterte and 11 senior officials for allegedly committing the crimes against humanity in relation to his war on drugs. In the 77-page communication submitted to the Office of the Prosecutor of ICC in the Hague, Netherlands, lawyer Jude Sabio said Duterte allegedly violated the Articles of the Rome Statute "through commission of mass murder or extra-judicial executions" constituting crime against humanity during his term as mayor of Davao City and now as President of the Philippines. Sabio is the lawyer of Edgar Matobato, a self-confessed member of the so-called Davao Death Squad, a group allegedly organized by then Mayor Duterte. Duterte's previous and current war on drugs have brought deaths to not less than 1,400 individuals in Davao City and more than 8,000 in his national war on drugs, respectively, he said. In his complaint, Sabio cited the similarities in the scheme being done during the time of Duterte as Davao City mayor and now as the president. “The basic material hallmarks or elements in the extra-judicial executions in the Davao Death Squad in Davao City and in the continued extra-judicial executions after President Duterte became the President are too numerous and too obvious to escape scant attention," he said. He cited the elements of police participation and command and of a hitman or an unknown armed assailant. There is a reward system for every killing; a "kill watch list," a collaboration between barangay and police officials, the cardboard sign and the face/body wrapped in packing tape, the use of “riding in tandem” motorcycle-riding assailants and use of hooded or masked assailants, and the planting of a gun and drugs, Sabio said. Other senior government officials were also named in the complaint for the alleged violation of the Rome Statute were Justice Secretary Vitaliano Aguirre; Police Director General Ronald dela Rosa; Speaker Pantaleon Alvarez of the House of Representatives; Former Interior and Local Government Secretary Ismael Sueno; Police Superintendent Edilberto Leonardo; Senior Police Officer 4 Sanson “Sonny” Buenaventura; Police Supt. Royina Garma; National Bureau of Investigation (NBI) Director Dante Gierran; Solicitor General Jose Calida; Senator Richard Gordon and Senator Alan Peter S. Cayetano. The Rome Statute is the treaty that established the ICC, the first permanent international court that is capable of trying perpetrators of genocide, crimes against humanity, war crimes and the crime of aggression, the Statute’s four core international crimes.The Philippines is a state party to the Rome Statute, together with other 123 state parties, after ratifying it in August 2011. After filing the case, Sabio said the Office of the Prosecutor will determine whether the case is within the jurisdiction of the ICC and if it is proper to file criminal charges against the accused, before investigating the case and issuing warrant of arrest against them. “A number of local and international human rights groups and other international bodies have called the attention of our government to stop the bloody killings in the country in the name of war against drugs," he said. Sabio said Duterte has completely ignored these calls, while his government officials and allies have become instruments in covering up the issue in the media and Senate investigations conducted. "It is for these reasons that I have referred this case to the ICC to make President Duterte accountable for his crimes in the name of international criminal justice, and to once and for all end this dark, obscene, murderous and evil era in the Philippines,” Sabio explained. Presidential Spokesperson Ernesto Abella questioned  the timing of the filing of the case amid the country's hosting this week of the Association of Southeast Asian Nations Summit. "The timing of the filing of the case is suspect - apparently meant to create negative news in the midst of the Philippines ASEAN debut," he said. "The intent of this filing in ICC is clearly to embarrass and  shame the President, and undermine the duly constituted government of the Philippines. It is a cynical effort against the reform-oriented agenda of the Duterte Administration and of the betterment of the lives of the Filipino people," he said. He expressed belief that the case would not prosper. "International Criminal Court rules provide that the ICC, as a court of last resort, will only exercise jurisdiction over a case once legal remedies in the Philippines have been exhausted," he said. "Atty. Sabio or his client, Mr. Edgardo Matobato, did not avail/exhaust all domestic remedies allowed under the Philippine Constitution," he added. Abella noted the Senate investigated the charges hurled against the President with Matobato, a self-confessed hitman, as star witness. "As such, there is no unwillingness or inability on the part of the State to investigate and prosecute the President," he said. He also reiterated that the so-called extrajudicial killings are "not state-sanctioned or state-sponsored." "Police authorities are conducting legitimate operations that require observance of operational protocols and those who breach procedures are made to answer before the law," he said, citing the Philippine National Police's Internal Affairs Service (IAS) tasked to probe police accused of violating procedures. This body can suspend or dismiss PNP personnel based on violations incurred and can recommend the filing of criminal charges, he said. (Celerina Monte/DMS)