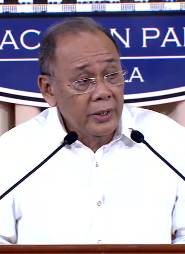 President Rodrigo Duterte's high satisfaction rating based on the latest survey was an indication of the public support on his declaration of martial law, Malacanang said on Friday. Duterte's satisfaction rating was at 78 percent, according to the Social Weather Stations' survey conducted on June 23 to 26, a month after he placed the whole of Mindanao under martial law on May 23. "The survey result, three percent higher from March 2017’s 75 percent, is a clear indication of the growing confidence in the Chief Executive and his performance as the country’s leader," Presidential Spokesperson Ernesto Abella said in a press briefing. "The data collection concluded on June 23 to 26, a month after PRRD placed the whole island of Mindanao under martial law, and it shows tacit public support to the President’s action following the rebellion in Marawi," he said. With the "positive acknowledgement" of the Filipinos, Abella said this further motivates the administration to work for the restoration of normalcy in Marawi and to start its rehabilitation as well as bring a comfortable life for all Filipinos, including Muslim Filipinos. Martial law has been effective in Mindanao for 60 days amid rebellion and invasion of the Islamic State-inspired Maute Terror Group in Marawi City. The Supreme Court upheld Duterte's declaration of martial law last Tuesday. (Celerina Monte/DMS)