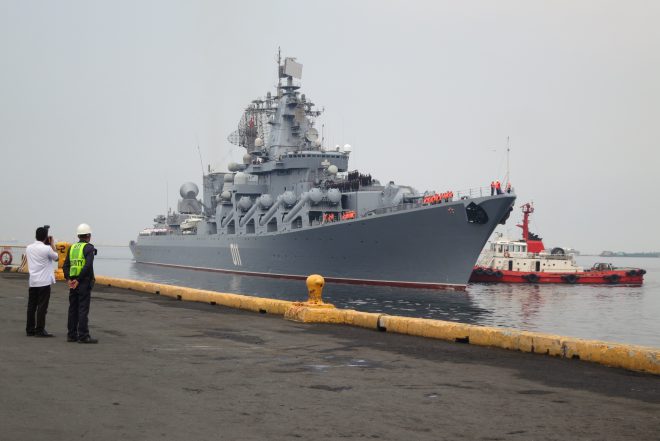 Varyag, the flagship of the Russian Pacific Fleet, a Slava-class guided missile cruiser arrived in South Harbor on Thursday morning. The Russian Navy concurrent Task Group Commander, Capt. Alexsei Ulyanenko, were welcomed by the contingent, headed by the Commanding Officer of Varyag and Philippine Navy as they arrived at Pier 15 around 9 am. Varyag arrived with the large Russian large tanker Pechenga. This is the second time that Russian Navy ships arrived in the country this year. Capt. Lued Lincuna, Philippine Navy spokesman, said the “Philippine Navy (PN) vessel BRP Rajah Humabon (FF11) rendered customary meeting procedures at the vicinity of Corregidor Island and escorted their vessels to its designated berthing area.” The Russian Navy were welcomed by the Philippine Navy representatives led by Navy Fleet staff for maintenance and repair Capt. Leo Ramon Miado. In his arrival statement, Ulyanenko emphasized their objective and the importance of their visit. “Our objective is to enhance our naval cooperation between our two nations and off course replenishment of resources and for the rest of our troops, it’s a great honor for us to visit Manila,” Ulyanenko said. “On behalf of the crew of the guided missile cruiser Varyag, I’d like to once again extend my greetings to all our Philippine friends and partners. I’m assuring you that we will do everything to make this port call a significant contribution in strengthening our friendship and cooperation between our two nations to the interest of security and stability within the region,” he added. “This courtesy call is very important to us this is why the pacific fleet command has established that the flagship guided missile cruiser is going to take part,” said Ulyanenko. Aside from a ship tour and concert on April 22 and 23, the Philippine and Russian navies are also set to conduct training. “We’ll be engaging them with the training. This is a training opportunity for us and we can view the advanced equipment of the Russian navy in line with our modernization efforts,” Miado said. Lincuna said the “engagement between the Philippine and Russian navies will culminate with a send-off ceremony and a customary Passing Exercise (PASSEX) between the visiting ships and FF11 at the vicinity of Corregidor Island.” “This visit by a foreign navy and the fitting reception bestowed by PN manifest a fosterage of goodwill which contributes to the sustained promotion of peace and stability, and enhancement of maritime cooperation through naval diplomacy and camaraderie,” Lincuna added. Robina Asido/DMS