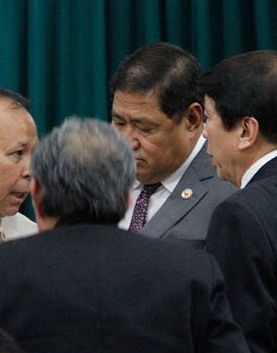 The House committee on justice Monday dismissed the impeachment complaint filed by a partylist congressman against President Rodrigo Duterte.. The panel, chaired by Oriental Mindoro Rep. Reynaldo Umali,  will prepare the committee report for plenary action. The justice committee found the complaint filed by Magdalo Partylist Congressman Gary Alejano sufficient in form but insufficient in substance. Alejano accused Duterte of culpable violation of the Constitution, bribery, betrayal of public trust, graft and corruption, and other high crimes, in the 16-page complaint he filed before the office of House Secretary General Cesar Pareja on March 16. An additional complaint was later filed. Oriental Mindoro Rep. Doy Leachon and Deputy Speaker and Capiz Rep. Fredenil Castro moved to declare the complaint  insufficient in substance after House Majority Floor Leader and Ilocos Norte Rep. Rodolfo Fariñas questioned Alejano’s personal knowledge about the complaint. “You (Alejano) don’t have any authentic records of these allegations. Then you stated under oath that your material allegations [are personal knowledge],” Fariñas told Alejano during the hearing. Fariñas said Alejano had no personal knowledge of the allegations, including over 8,000 drug suspects that were killed in the war on drugs, drug suspects who were killed by the Davao Death Squad (DDS), and other issues raised. “Clearly, it’s not in his personal knowledge. That is the defect here… You are introducing statements under oath, these are not your own,” said Fariñas. Alejano pointed out his personal knowledge is believing the authenticity of  official documents and reports in the newspapers. “I culled from important records including the news reports regarding  the authentic records. I understand we are not here where we would present the evidence. There is no marking of evidence yet,” said Alejano in response to Fariñas. “My allegations are based on authentic records… In proper time we will present the authentic records, Mr. Chair,” Alejano argued. Castro said hearsay accounts are not allowed in accepting evidence. DMS