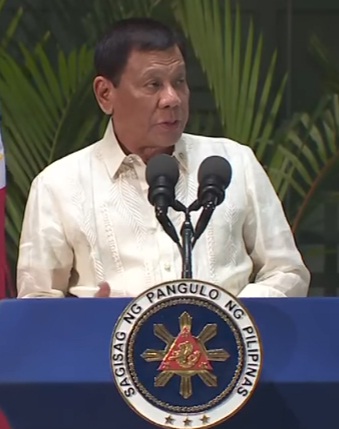 If Duterte has a choice, he’s happy to hang EU for criticizing war on drugs, reimposition of death penalty

President Rodrigo Duterte said on Thursday if he has only a choice, he would hang the members of the European Union for pressuring the Philippines and other Southeast Asian countries against death penalty. In a press conference early Thursday following his return from Myanmar and Thailand, Duterte said EU should not meddle with internal affairs of other countries, citing even Indonesia and Malaysia, which have the death penalty, are being pressured. "You fool, son of a bitch, don't interfere. I'll be the one to tell you, all of you fool. Who want to kill, especially of your countrymen?," Duterte said. "I will just (be) happy to hang you. If I have the preference, I'll hang all of you. You are putting us down. You are exerting pressure in every country, which has death penalty," Duterte stressed. One of the priority measures of the Duterte administration is reimposing the death penalty. There is now a move in Congress to restore capital punishment, which was abolished in 2006. The EU has criticized the Duterete administration for the bloody war on illegal drugs, resulting to the death of over 7,000 people who were allegedly involved in the drug menace. Duterte said while he kept on saying that he will kill those involved in illegal drugs, "with God's mercy, I haven't yet killed anyone now." When he was still a mayor of Davao City, the president admitted that he had killed some three people who were involved in a kidnapping incident. (Celerina Monte/DMS)