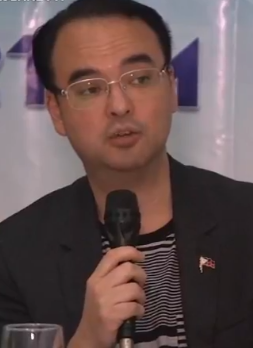 Incoming Foreign Affairs Secretary Alan Peter Cayetano has assured all efforts of past administrations on its claims in the disputed South China Sea would not be wasted. In a press conference in Cambodia Wednesday night, Cayetano, who is a senator, said the Duterte administration would not engage China and other claimant countries in the South China Sea into a fight. "All the past efforts, from President (Ferdinand) Marcos and even before, to President (Benigno) Aquino's (III), we won't waste anything. It means that all the bullets given in favor of the Philippines, they are there," Cayetano said. Marcos issued a proclamation declaring the Kalayaan Island Group was part of the Philippine territory. Under Aquino's presidency, the government questioned before an arbitral tribunal China's "historic" claim in the South China Sea through its nine-dashed line, which overlaps with the 200 nautical miles exclusive economic zones of other coastal states, such as the Philippines. The Hague-based Permanent Court of Arbitration ruled in favor of the Philippines in July 2016. Cayetano said he will assume his post at the Department of Foreign Affairs after the Commission on Appointments approves his nomination. He said there was a move from his colleagues in the Senate to fast-track his confirmation. Cayetano will replace Perfecto Yasay Jr. whose nomination as DFA chief was rejected by the CA due to issue on his citizenship. DFA Undersecretary Enrique Manalo continues as the department's officer-in-charge while Cayetano could not assume the post yet Cayetano reiterated what President Rodrigo has said in handling the territorial dispute with China, which is to "give him the option when he will raise, when he will use (the PCA ruling)." "And we will follow the President," he said, noting that in May, he will participate in the bilateral meeting of Manila and Beijing where they will discuss the Code of Conduct of Parties in the South China Sea. During that meeting to be held in China, he said PCA ruling may or may not be raised. "My point is, if we are going to engage in a tussle all our neighbors with whom we have a (territorial) dispute, we will be the only one to be left behind in the region," Cayetano said, citing aside from China, other claimants in the South China Sea are Brunei, Malaysia, Vietnam and Taiwan. He said the Duterte administration has its own strategy in dealing with the issues. Once he assumes the DFA post, Cayetano said he will avoid "microphone diplomacy." "I would like to institutionalize more briefings, which are off-the-record to the media, to the Senate, to the House and to other interested groups, including think-tanks so they will know the information that we know," he said. "Because sometimes, the information is not sufficient. But when we do those briefings, it’s with the understanding that there are things that are not for broadcast. Because it’s --- for example, still under negotiations," Cayetano added. "That’s why I’m here because it’s my obligation but after this, after my saying thank you confirmation, you’ll hear more from the spokesman and much, much less from me because I'm not going to use microphone diplomacy," Cayetano added. He also defended himself from criticisms the DFA head should be a career diplomat. "It’s been more usual than unusual in the past decades that it’s not a --- that it’s a political appointee (who was the DFA secretary)," he said. (Celerina Monte/DMS)