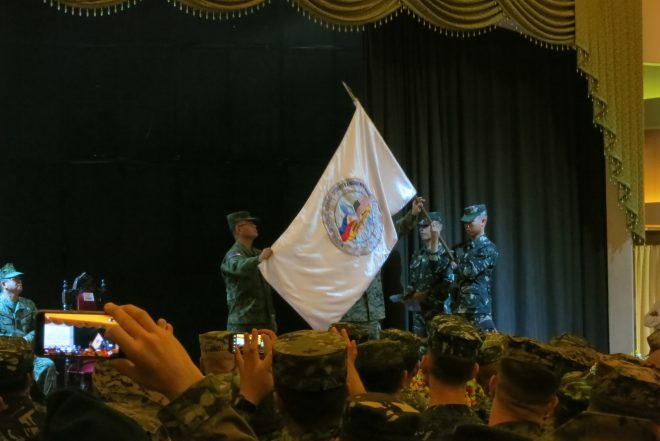 Japanese troops will join the humanitarian assistance and disaster response activities of this year’s Balikatan exercise between Philippine and United States forces. Lt. Gen. Oscar Lactao, Balikatan 2017 Philippine Exercise Director confirmed the participation of Japanese troops on Humanitarian Assistance and Disaster Response (HADR) activities for this year’s 33rd Balikatan exercise. “We have civil works that being done in the Visayas in Ormoc City and Guian, Samar so there are some schools that are built there and there are bilateral exercises in Fort Magsaysay, in Clark and in Ternate, Cavite,” he said. “There is a civil military exercise from the sea so we want to simulate giving of, providing relief to coastal areas from the eastern, north eastern part of the country so we will go to Batanes, Casiguran, Sta Ana (in) Cagayan, and Maconacon (in) Isabela, these are very isolated areas and we want to test the capability of the, both the armed forces,” he added. Lactao said a total of 20 Japanese troops and 80 Australian soldiers will participate in this year’s Balikatan activities while 2,800 Filipino troops and 2,600 American personnel will  join the exercises. Major Celeste Frank Sayson, Balikatan Philippine Public Affairs Officer, confirmed it is the first time Japanese forces are joining the exercises as they were usually attending the activities only as an observers in previous years. “They are still observing participants not full-pledged participants,” Sayson said in a text message to the Daily Manila Shimbun. Sayson could not say how many are the Japanese assets joining the HADR activities but he said there will be Japanese aircraft that will utilized. He said AFP assets that will join the exercises includes BRP Tarlac, Augusta 109 helicopters, landing craft utility, C-130 aircraft and Huey helicopters, while the US will have one ship and its Osprey helicopters. On its advisory, the activities under this year’s Balikatan includes HADR/ Counter Terrorism Staff exercise in Camp Aguinaldo, Quezon City on May 11, Disaster Preparedness training in Fort Magsaysay, Nueva Ecija on May 12, Civil Military Activities from the sea in Casiguran, Aurora on May 15, HADR in Upi, Isabela on May 16 and Humanitarian Civic Action engineering civic assistance project in Guiuan, Samar. Aside from Lactao and his US counterpart Lt. Gen. Lawrence Nicholson, the event was also led by US Ambassador to the Philippines Sung Kim, Department of National Defense Secretary Delfin Lorenzana, Undersecretary for Civilian Security and Consular Concerns Ariel Abadilla and Armed Forces of the Philippines (AFP) Chief of Staff General Eduardo Ano. In his speech during the opening ceremony, Lorenzana emphasized the difference of this year’s Balikatan to the previous year’s joint exercises between US and Philippine troops. “One of the reasons that make this year's Balikatan different, more special is because as mentioned a while ago we are concentrating on HADR or Humanitarian Assistance and Disaster Relief operations and counter terrorism, and I think under the current situation in the world when calamities is becoming more severe, I think we have to devote more resources and time to this kind of activity and also to counter terrorism,” he said. “I talked to the defense ministers of China Russia and all the defense ministers all over in the middle east and the concern is terrorism, I think it’s a global threat I think America is not, is also buckling both at home and abroad, and so this year's exercise provide both the AFP and the US armed forces the necessary capability training in responding to disasters and rescue operations during crisis and meeting challenges violent extremism,” he added. In his remarks, Kim emphasized the importance of Balikatan exercise for the participating countries. “The lessons we take from Balikatan this year will allow us to respond together to the next disaster more quickly and more effectively, and counter terrorism training during balikatan our forces exchange critical skils needed to address our shared struggle against terrorism, training shoulder to shoulder, as friends, partners and allies our two military also build trust and relationships that will help them deal effectively together with the full range of challenges here in the Philippines and beyond, so Balikatan is always a very important exercise,” he said. “But from my perspective, it’s more than that, Balikatan is a very special meaning for embodiment of our robust bilateral relationship and reflects not only our strong military partnership but also the deep friendship between our two peoples, mutually beneficial economic ties and very importantly our shared history and shared interest,” he added. Kim also expressed gratitude to defense and military officials who work to make this year’s Balikatan exercise possible. “I thank everyone who contribute to make Balikatan possible and as I look forward to productive and successful training events for the next 12 days Im confident that Balikatan 2017 will reinforce the deep and lasting commitment among our armed forces to each other and for the peaceful and secure community internationally,” he said. (Robina Asido/DMS)