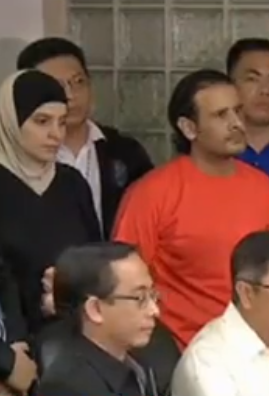 Authorities have arrested a Kuwaiti national, who is allegedly a member of the Islamic State of Iraq and Syria (ISIS) and a  pregnant Syrian In a press conference Thursday, Justice Secretary Vitaliano Aguirre II said the woman, Rahaf Zina is the widow of the second highest-ranking ISIL military commander who was killed in Syria. Aguirre said Husayn al-Dhafiri and Zina were arrested on March 25 in Bonifacio Global City, Taguig. They have been in the country since January 28. "Acting on the strength of a Bureau of Immigration Mission Order dated March 24, 2017, operatives of the BI’s Fugitive Search Unit in close coordination with the Armed Forces of the Philippines, and the Philippine National Police, conducted enforcement operations along 28th St., Bonifacio Global City, Taguig City resulting in the apprehension of a Kuwaiti ctizen, Husayn Al-Dhafiri,” Aguirre said. Based on information from the US Federal Bureau of Investigation, Al-Dhafiri has links to terrorism and is believed to pose a threat to the national security of the Philippines. Aguirre said intelligence reports by the AFP said Al-Dhafiri is a member of the Islamic State of Iraq and the Levant (ISIL), also known as ISIS. “He is alleged to have been involved in explosives manufacturing and possibly on operational planning against Kuwait,” Aguirre added. Aguirre said when they were arrested Zina claimed to be his wife and was pregnant. Al-Dhafiri was identified as an ISIS middle-level leader of the brother of a former IS leader who is deceased. Aguirre said the two could not show any immigration document. Deportation proceedings are being held. Al-Dhafiri will be deported to Kuwait and Zina will be returned to Qatar. “Actually, what we have is violation of our immigration laws. They failed to present immigration documents when they were arrested on March 25,” he added. A day after their arrest, Aguirre said the two were turned over to the National Bureau of Investigation while deportation proceedings are ongoing. Aguirre said they received information  Zina is “the widow of one of the ISIL leader who was killed in combat operation, a certain Abu Jandal Al Kuwaiti, the number two military commander of ISIL in Syria.” Asked if the two are still active ISIS members, Aguirre said they believed they are still active members of the terrorist group. “Based on the information given by the Kuwaiti government, they are active members of ISIS or ISIL,” he added. Bureau of Immigration Commissioner Jaime Morente said the two traveled to Davao City and Cebu in January this year where they stayed for several days before returning to Manila. DMS