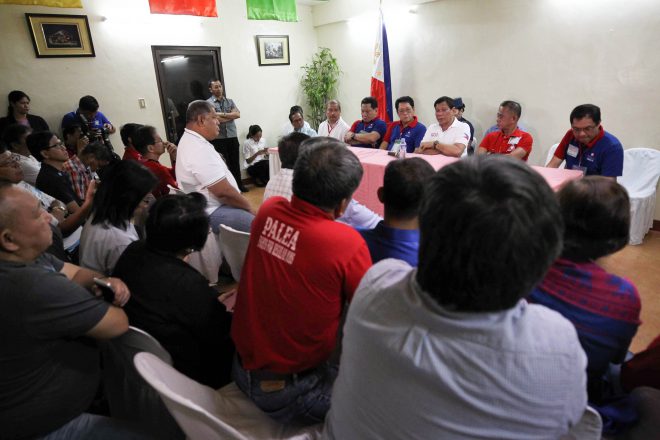 Labor unions criticized the government for lack of attention in helping workers get better jobs and more efficient social protection benefits. “We have been witness to recent series of events where our poorest poor people were forced to raid rice warehouses, invade government housing units and claim ownership to lands that they felt was deprived from them. We do not condone nor tolerate these illegal actions but we attribute these series of lawlessness as symptoms of an irresponsive government and inhumane employers and capitalists,” said the Association of Labor Unions in a statement Monday. The purchasing power of the P491 daily minimum wage is below the 2015 standard poverty level of P393 needed by a family of five to survive in a day. "This condition needs immediate response from government and employers. Workers are now desperate and if this is met inaction many will resort desperate means to survive,” ALU said. The ALU will propose to President Rodrigo Duterte a P500 monthly subsidy for workers to cope with the rising cost of living. ALU also urged the government to enforce labor standards and occupational safety and health standards especially after fires in Valenzuela and Cavite. “The Associated Labor Unions is urging the government to consistently enforce labor standards and occupational safety and health standards. We call on employers and business-owners to faithfully comply to labor laws and policies,” spokesman Alan Tanjusay said. Thousands of rallyists from various organizations conducted a Labor Day protest in Manila, Pampanga and Laguna, police said. Some 2,500 Kadamay members and 100 members of Centro staged at Welcome Rotonda. About 1,500 members of Kilusang Mayo Uno gathered at Xevera Subd., Brgy. Tabun, Mabalacat City, Pampanga. The assembly, done in the morning, was peaceful, a police report said. Around 700 people from 12 labor unions  marched to Mendiola to call for a P750 daily minimum wage, stop contractualization and replace Labor Secretary Silvestre Bello III. Their program ended at 2:12pm and they dispersed at 2:22 pm, police said. Some150 members of Salamat Po Manggagawa and Lakas Mangagawang Nagkakaisa sa Honda led by Eric Rosal assembled in front of Shopwise Paseo, Sta Rosa, Laguna. The nationwide observance of Labor Day was generally peaceful throughout the country." Chief Superintendent Dionardo Carlos, Philippine National Police (PNP) spokesman, said this was the overall assessment of the PNP Director General Ronald Dela Rosa  who was monitoring Labor day activities through the PNP National Operations Center. "We came well prepared for this event.  Our preparations and the cooperation of those who took part in the public assemblies were instrumental to the generally peaceful outcome of the event," he said. "This only goes to show that peaceful and orderly public assemblies can be held if everyone will cooperate," he added. Carlos said the PNP also "congratulate the different labor organizations that held peaceful and orderly mass actions." "They truly represent the highly-skilled and law-abiding Filipino labor force that is the source our national pride," he said. (Ella Dionisio, Robina Asido Alanna Ambi/DMS)