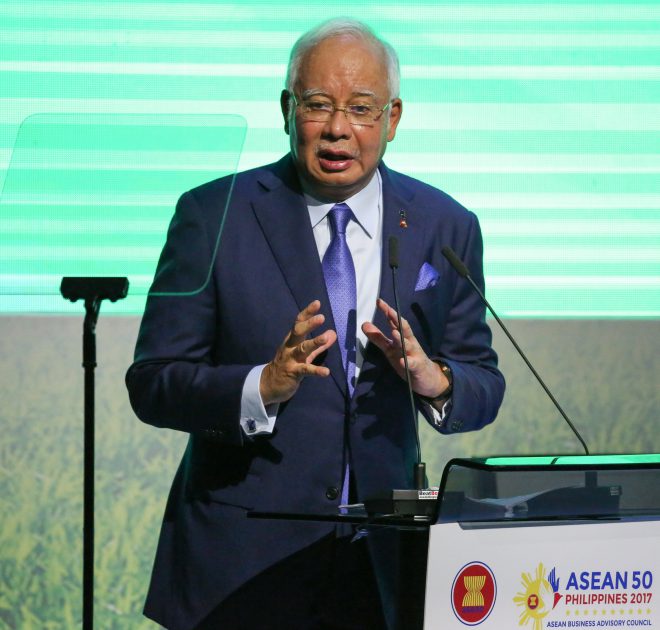 Malaysian Prime Minister Najib Razak warned on Friday of the possible rise of extremism in Southeast Asian region if prosperity would not be felt by all its citizens. Speaking before the 'Prosperity for All Summit" led by the ASEAN Business Advisory Council in Pasay City, Najib underscored the need for people in the region not to feel marginalized. "We do not want any of our citizens to be marginalized. In an age of extremism and radicalization, and there is a practical reason for that. We know that those who see no hope in their own societies are more prone to the siren calls of terrorist groups, who can exploit their vulnerability and lure them with their lies by giving them a false sense of purpose and achievement," Razak said. "One of the lessons of the rise of extremist populism in Europe, too, is that a neglected underclass – of those who felt left behind by economic growth, prosperity and the benefits of globalization – can overturn elections and political systems," he added. Some Southeast Asian countries, such as the Philippines, have been facing the problem of extremism. In the Philippines alone, the Duterte administration has been waging war against the Abu Sayyaf Group and the Maute Group, which both pledged allegiance to the Islamic State. Aside from the two local terrorist groups, the Philippine government is also pursuing peace process with the communist rebels and the Moro National Liberation Front. Najib lauded the growing economies in Southeast Asia, which is even faster than most of the rest of the world. "It is expected that by 2050 the ASEAN economy will amount to over $9.2 trillion, making it the fourth largest in the world, he said. The economy of ASEAN, which is on its 50th year this year, multiplied 28 times, from $87.2 billion in 1975 to $2.5 trillion in 2014, he noted. At the same time, he expressed hope that the framework of cooperation signed earlier this month in Tokyo of the ASEAN-Japan Innovation Network by the ASEAN BAC and the ASEAN Business Club, with major Japanese business organizations, would bring, through the use of technology, "those on the periphery of economic prosperity to its mainstream." (Celerina Monte/DMS)