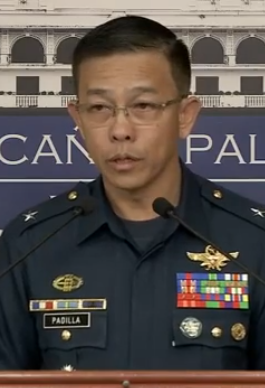 Military sees no threat to ASEAN hosting, but prepares for the worst

The Philippine military sees no specific threat in the country's hosting of the 30th Association of Southeast Asian Nations Summit this week, but it has been preparing for the worst, its spokesman said on Tuesday. In a press briefing in Malacanang, Brig. Gen. Restituto Padilla Jr. said there is adequate preparation for the week-long event where about 1,900 people are expected to participate from 10-member countries of the ASEAN, including their leaders. "On the matter of whether there is a threat that is being seen in the holding of all these events, there's none. We don't see any threat right now, no serious threat that is in the radar screen but our planning is always based on worst-case scenarios," Padilla said. "So, whatever worst-case scenarios that we anticipate that could happen, then adequate preparations and plans are laid down to meet these scenarios," he said. The Armed Forces of the Philippines is part of the Joint Task Force-National Capital Region that has been manning the security in Metro Manila. It is composed by about 41,000 government security forces and other personnel, with the Philippine National Police as the lead agency. Padilla said the JTF-NCR is fully equipped with whatever they need and the AFP has provided whatever it is that they will still need just in case of any contingency. He also urged the public to ensure that the country's hosting of ASEAN "go unhampered and uneventful." "Your participation as a citizen, being alert to the conditions in your environment, and watching over all those that we are conducting and safely looking after each other’s welfare is a very critical ingredient to make our hosting a successful one," he said. All the 10 ASEAN leaders, except Myanmar, are expected to attend in the Summit on April 29. Myanmar will be sending State Counsellor Aung San Suu Kyi to participate in the Summit, the ASEAN National Organizing Committee has said. (Celerina Monte/DMS)