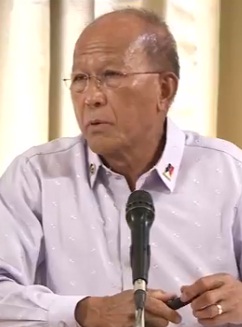 The Armed Forces of the Philippines remains focused on meeting a six-month deadline to totally eliminate the extremist Abu Sayyaf Group, Defense Secretary Delfin Lorenzana said on Monday. In the "Mindanao Hour" briefing in Malacanang, Lorenzana said the military has until the end of July to meet the deadline. "So hopefully, we can finish the Abu Sayyaf. Because we are actually talking about the Abu Sayyaf there in Marawi. But don’t forget that we still have Abu Sayyaf existing in Jolo and in Basilan," he said. However, the Abu Sayyaf are holding 24 hostages, 18 of whom are foreigners, the Western Mindanao Command said. AFP chief of staff General Eduardo Ano has ordered the military's Western Mindanao Command to "totally decimate" the Abu Sayyaf and other terror groups in the region. Lorenzana said some Abu Sayyaf members who went to Marawi as members of the Islamic State-inspired Maute Terror Group were neutralized. "I don’t know how many more are left in Jolo. We are still trying to verify how many are still there in Jolo and Basilan. And our troops are still operating there also in tandem with what we are doing in Marawi," he said. AFP spokesman Brig. Gen. Restituto Padilla Jr., in the same briefing, said much has been accomplished in the past months as far as the fight against the Abu Sayyaf is concerned. He recalled when the AFP leadership set a deadline, there was rampant kidnapping in southern Philippine waters. "Any abduction in the high seas was one of the principal criminal activities that they have been doing and that we wanted to address, something that was a cause of national embarrassment. May I ask you, have you read anything of that sort happening lately? For more than three months, I guess, we have not heard anything," he said. "So we have successfully degraded the capability and the capacity of this group to undertake many of these criminal activities that have been undertaken in the high seas," he added. The military earlier said for the first six months of this year, 94 Abu Sayyaf bandits were killed, 66 were arrested, and 98 had surrendered. (Celerina Monte/DMS)