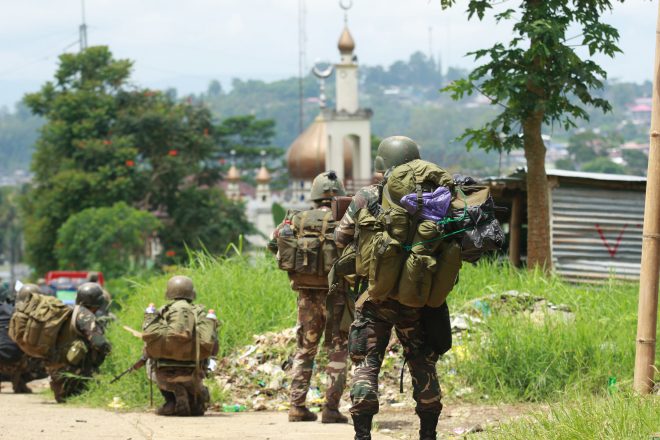 Civilians rescued from the conflict area in Marawi revealed the terrorist group forced them to steal money and valuable items from houses and establishments, a statement from a military task force said Tuesday. “An estimated P500 million worth of cash was reportedly looted or stolen by Maute and ASG rebels together with criminals in Marawi City according to revelations by hostages who successfully escaped and were later on rescued by government forces,” the Joint Task Force (JTF) Marawi said. “Seven hostages who were able to reach government forces two weeks ago, followed by another who escaped a few days later and by another two several days ago, made this disturbing revelations thus corroborating earlier information received by JTF Marawi headquarters,” it added. JTF Marawi said according to the hostages they were forced to convert to Islam or be killed. The joint task force said the hostages “believe that the amount of cash and valuable items looted could be worth more as there were several other groups being forced by terrorists to loot and steal for them.” It said the terrorist group ordered the hostages to conduct looting from 7 to 11 in the morning and after lunch time up to 3pm. “The looted items were brought to a central storage in a mosque and received by designated Maute members who were keeping a list for accounting,” it said. ‘It is believed there are countless other crimes being committed by the Maute/ASG rebels and criminal gangs while fighting is ongoing,” it added. (Robina Asido/DMS)