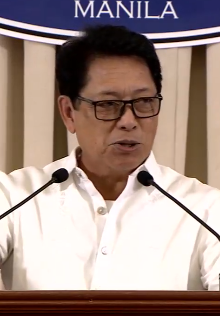 The communist National Democratic Front wants to hold the informal peace talks with the Philippine government in Japan, an official said on Tuesday. In a press briefing in Malacanang, Labor Secretary Silvestre Bello III, who heads the peace panel with the NDF, said the stalled fifth round of formal peace talks will resume in August. Before that, both sides have agreed to hold informal meeting, he said. "And the meeting may be in Asia or the Philippines. Although the NDF would like to have it somewhere - they were mentioning Japan," Bello said. But Bello said Japan was a bit far, thus, he suggested Hong Kong or the Philippines, especially that Jose Ma. Sison, founding chairman of the Communist Party of the Philippines, would not be attending. In the informal meeting to be held in the third or last week of July, he said the panels would set to discuss mainly the issue of socioeconomic reforms and a possible interim unilateral ceasefire. Bello expressed hope an interim unilateral ceasefire could be signed before or during the formal peace talks in the second or third week of August. The fifth round of formal peace talks on May 27 to June 1 were stalled after the government panel refused to participate following the order of the CPP leadership to the New People's Army to intensify the attacks against government troopers due to President Rodrigo Duterte's declaration of martial law in Mindanao on May 23. (Celerina Monte/DMS)