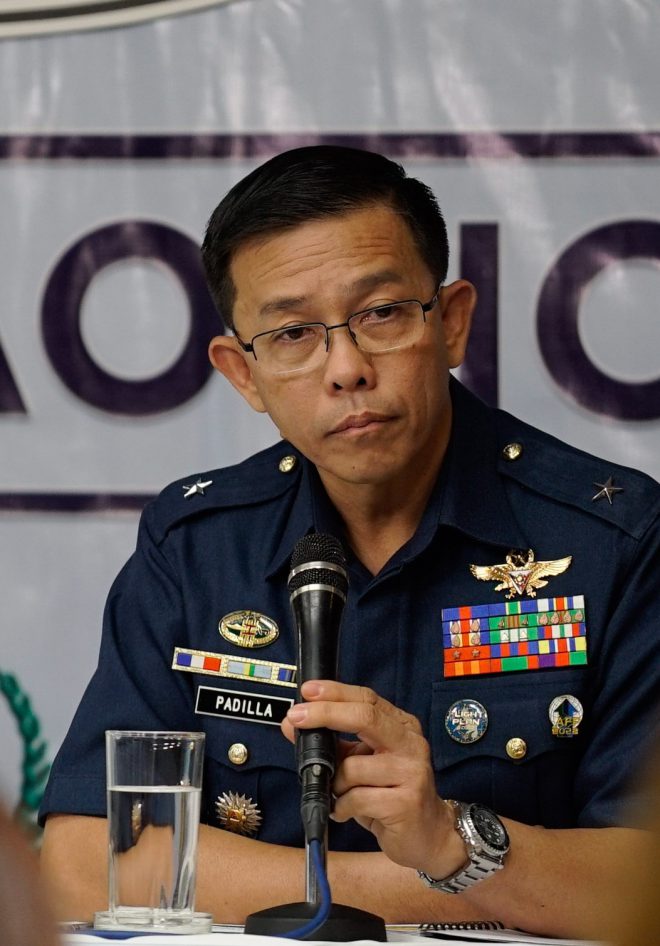 The communist New People's Army and illegal drugs are part of the military operations under martial law, a military spokesman admitted on Wednesday. In the "Mindanao Hour" briefing in Malacanang, Armed Forces of the Philippines spokesman Brig. Gen. Restituto Padilla Jr. said the Communist Party of the Philippines' order to the NPA to intensify attacks against the government troopers in Mindanao has prompted the military to include leftist rebels in its operations. "Yes, because of that directive of the NPA. It’s tit-for-tat. So why would we not forewarn our men, like what the Secretary (Delfin Lorenzana of the Department of National Defense) has mentioned, if we know that they are leaning forward to attack and destroy our forces?," he said. But despite the inclusion of the  rebels in the military’s targets, he said it did not mean  the government has stopped its peace talks with them. "Having that does not necessarily mean that we’re stopping the peace talks. So actually, the NPA and the Armed Forces are in a talk-and-fight and fight-and-talk situation," Padilla said. But he said it would have been more desirable to have a silencing of the guns while the peace talks are ongoing. "Government is sincere, it has shown it many times over, the Armed Forces has done the same. We are waiting for the --- an act of sincerity on the part of the other party as well. But it does not necessarily mean that the peace talks will stop," Padilla explained. According to government peace panel head, Labor Secretary Silvestre Bello III, informal talks with the National Democratic Front, the political wing of the CPP-NPA, would be held this month before the possible resumption of the 5th round of formal talks in August. Government forces have also included in their operations the fight against illegal drugs. "Well, it’s like this. It’s just doing economies of scale. You're also there, you’re conducting military operations and security operations, if you can also include those involved in drugs, why not?," Padilla said, noting the huge quantities of illegal drugs seized in Marawi. President Rodrigo Duterte earlier said Maute militants were being funded by the proceeds from illegal drugs. "Remember that even before the declaration of martial law, there was already a national effort to go after drug syndicates and degrade their capability," Padilla added. "So it only made sense that in the effort that we were doing to counter the rebellion, it went on to include the drive against drugs. So that you were doing a security operation, you would target all of this already in one swift stroke." (Celerina Monte/DMS)