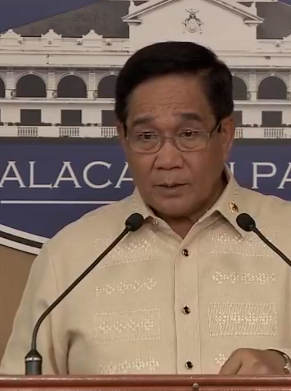 The communist New People's Army has remained as the top threat on the Filipinos' way of life, National Security Adviser Hermogenes Esperon Jr. said on Thursday. Esperon, in a press briefing in Malacanang, cited other threats which the government has to deal with. "I’m not saying that communism is bad. But it’s something that would not really be the way of life that is good --- the way that the Filipinos would want. So if the basis is way of life, then I would say the Communist Party, the NPA, and the NDF would be the number one threat," Esperon said. The government has been trying to forge a peace pact with the communist rebels, which have been waging war against the government for 48 years. Esperon said the NSC ranks terrorist as "very high" in terms of threat to freedom of movement, unwarranted fear, mass destruction and extremism. "I would rank the terrorist as very high, especially so that there are now reports that ISIS members are here already and they have a ready force that would be willing to join them," he said, citing that the terrorists, particularly the Abu Sayyaf almost disrupted the Association of Southeast Asian Nations meetings in Central Visayas. Esperon was referring to the foiled attack by the Abu Sayyaf in Bohol province where ASEAN meetings were also held. "We would not want people to be believing that the Philippines is the center for kidnappings and beheadings. That’s bad for our image. So based on that, I would rank terrorism as high among the threats," he said. The national security chief also cited illegal drugs as a threat, particularly in protecting the family, the basic unit of society. "Because the family is the basic society, unit of society, then you might want to consider drugs as the top and because the effects of illegal drugs is so penetrating into the fiber of the family," he said. "Criminality and lawlessness, we know that was the promise --- campaign promise of the President. So lahat ng criminal activities, we will go for --- we will go against it because for one, illegal gambling is contributory also to illegal drugs," he added. Esperon also cited graft and corruption problem as being high in national security threats. As to the external threats, he cited the transnational crimes and the country's "handling of the issues in the South China Sea." But he explained the Duterte administration has its own way of managing the problem in the South China Sea. "It’s management. We got nothing if for the last so many years for just concentrating on South China Sea. There are other ways of engaging the neighbors," he said. The Duterte administration has taken a friendly stance with China insofar as territorial dispute is concerned. (Celerina Monte/DMS)