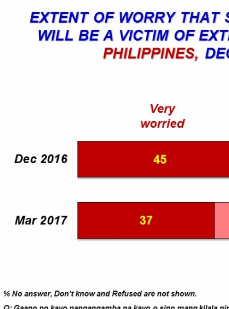 Malacanang blamed on Monday the slight increase on crimes against property in the past three months on the suspension of "Oplan Tokhang and Project Double Barrel" by the Philippine National Police late January. A survey by the Social Weather Stations on March 25-28 via face-to-face interviews with 1,500 adults nationwide showed 6.3 percent or 1.4 million families lost property to street robbery, burglars (break-ins), or carnappers within the past three months, compared to 4.8 percent or about 1 million families in December 2016. Presidential Spokesperson Ernesto Abella said the latest figure "validates earlier reports showing an increase in crime after the Philippine National Police (PNP) suspended Oplan Tokhang and Project Double Barrel last January." The police's program is a campaign against illegal drugs of the administration where allegedly over 7,000 people have been killed since July 1, shortly after President Rodrigo Duterte assumed the presidency. "The temporary suspension of police anti-drug operations proved to be a window of opportunity for illegal drug violators to engage in burglary and car theft," Abella said. Duterte previously ordered the suspension of "tokhang" late January after some  policemen were allegedly dragged into the murder of South Korean businessman Jee Ick-joo in October. Jee was allegedly killed inside police Camp Crame headquarters. The police scalawags allegedly used "tokhang" in kidnapping and then killing the South Korean. On March 6, the PNP relaunched "Oplan Double Barrel Reloaded," where the police leadership promised that the war on drugs would be more extensive, aggressive and well-coordinated, with built-in systems that guarantee full accountability and instil internal discipline among all personnel. Abella noted the 6.3 percent SWS figure was still 1.3 percent below the 2016 annual average of 7.6 percent. "The same survey showed a steady number, at 52 percent, of drug addicts in the neighborhood as perceived by respondents; meaning, there was no decrease in the number of drug addicts from last December’s figure, which can likewise be attributed to the temporary halt of police anti-drug operations," he said. (Celerina Monte/DMS)