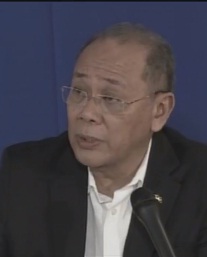 The Duterte administration would take "non-combative and non-adversarial" approach with China amid reports Beijing has constructed new military facilities on artificial islands in the disputed South China Sea. In the "Mindanao Hour" briefing in Davao City on Friday, Presidential Spokesperson Ernesto Abella said he defers to Defense Secretary Delfin Lorenzana and to Foreign Affairs Secretary Alan Peter Cayetano the latest report of the Asia Maritime Transparency Initiative regarding developments on the Fiery Cross, Mischief and Subi Reefs in the Spratly Islands. But he reiterated Duterte's approach to the regional socio-geopolitics "has always been to come into a mutual understanding and dialogue in order to resolve cases like these. "We need to just go back to the fact that the president, at this stage, has been non-combative and non-adversarial. But has approached regional geopolitics from the point of view of dialogue and mutual understanding and mutual support." AMTI, conceived by the Center for Strategic and International Studies, a US-based think tank, reported new imagery showed while China was keeping attention focused on its negotiations with Southeast Asian countries over basic principles to manage the South China Sea disputes,  its construction of military and dual-use facilities on the Spratly Islands continues. "New missile shelters, radar/communications facilities, and other infrastructure are going in on Fiery Cross, Mischief, and Subi Reefs, suggesting that while the region is engaged in peaceful discussion, China remains committed to developing its power projection capabilities," AMTI said. It said Fiery Cross Reef continues to be the most advanced of China’s bases. It specifically warned the Philippines of China's installation of communication and radar equipment near Palawan. "China is also busy expanding its already substantial communications and radar capabilities on the artificial islands. A very large antennae array is being installed on a small outpost at the southern side of Mischief Reef, presumably boosting China’s ability to monitor activity around the feature. That ability should be of particular concern to Manila, given Mischief’s proximity to Palawan, Reed Bank, and Second Thomas Shoal," AMTI said. China has been working with ASEAN on the framework of Code of Conduct of Parties in the South China Sea. But the framework once completed would remain non-binding. Contrary to the strong stance of the previous administration against China's actitivities in the disputed waters, Duterte, who had been to Beijing twice, has softened his position and even decided not to bring up at this time the ruling of the Permanent Court of Arbitration favoring the Philippines and invalidating China's historic claim over the South China Sea. Duterte has considered China as the Philippines' good friend as it donated recently pieces of assault and sniper rifles and ammunition to the Philippines to fight terrorists and P15 million for the rehabilitation of war-torn Marawi City. Beijing has promised more assistance to the Duterte administration. (Celerina Monte/DMS)