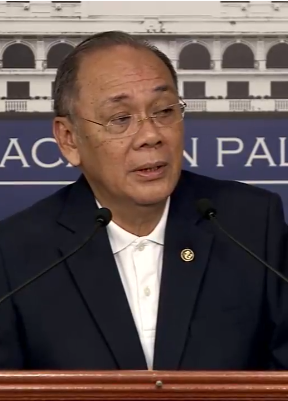 Malacanang said President Rodrigo Duterte clarified his statement "lobby money talks" during last Monday's cabinet meeting. Presidential Spokesperson Ernesto Abella told a press briefing Tuesday the president clarified his statement by saying lobby is not necessarily money. "The president did say last night that when he said lobby, it's not necessarily money. He corrected himself. I mean he clarified himself. He said when he said lobby, people automatically assume there was an exchange of money," he said. Abella added the president said lobby is a legal thing that someone can exercise in order to persuade one's particular position. "So, it was not a pejorative- he was saying in a sense. It was- he was clarifying last night. It was not pejorative accusation, that money was transferred or money was exchanged," he said. He said the president is not back-pedalling, " he is simply adding to the explanation." Duterte last May 4 said "lobby money talks" in saying why Gina Lopez was not confirmed by the Commission on Appointments as secretary of the Department of Environment and Natural Resources (DENR). "I really like her passion. But you know how it is. This is democracy and lobby money talks. I do not control everything," Duterte said. (Ella Dionisio/DMS)