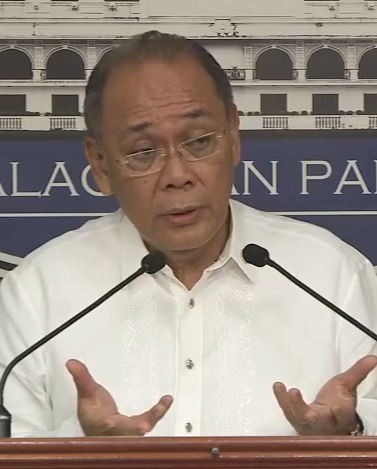 Malacanang downplayed on Wednesday warning of lawmakers that President Rodrigo Duterte could be impeached following his seeming soft stance on Chinese vessels' presence in Benham Rise. "There are no grounds for impeachment.  No treason, betrayal of public trust, bribery, graft and corruption, and high crime was committed," Presidential Spokesperson Ernesto Abella said in a statement. Trillanes said Duterte's seeming confusing statement on Benham Rise, which was confirmed by the United Nations as part of the Philippine continental shelf, could be a ground for his ouster. Magdalo Rep. Gary Alejano said if Duterte fails to protect the country's territory, including Benham Rise, this could be a ground for impeachment, being a culpable violation of the Constitution. Mutinlupa Rep. Ruffy Biazon, who is set to file a resolution inquiring into the government's strategic direction in securing Philippine interests in its eastern seaboard, said the Philippine government “must take decisive measures to prevent China from creeping into Benham Rise since our country's sovereignty is at stake.” “While military confrontation is definitely not an option in order to avoid armed conflict, passive diplomacy is also insufficient, based on China's track record of disregarding even the UN-led recognition of our rights in the West Philippine Sea,” he said. Abella said the president is fully committed to his constitutional duty to protect and defend the nation's interests, including those granted to the Philippines by the United Nations Convention on the Law of the Sea and other similar treaties which country is party to. "The President is also committed to pursuing an independent foreign policy and friendly and mutually-beneficial ties with all countries with the national interest as the primary consideration," he said. Duterte earlier said the presence of Chinese vessels in Benham Rise had his permission. This was despite the concern raised by Defense Secretary Delfin Lorenzana on the incident. (Celerina Monte/DMS)