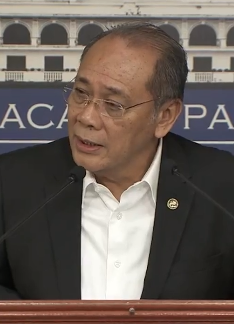 Palace justifies pivot to China, Russia amid Filipinos’ distrust towards the 2 countries

Malacanang defended on Wednesday the Philippines’ pivot to China and Russia amid a survey showing most Filipinos still have considerable distrust towards the two countries. In a statement, Presidential Spokesperson Ernesto Abella said the Duterte administration is charting the path of "broader" diplomatic relations with the international community. He said renewed ties with Russia and China "provide a healthy opportunity to appreciate and  understand these two countries." "As the President charts an independent foreign policy, the public needs a deeper understanding of the need for expanding our diplomatic horizons," Abella said. "Our enhanced relations with China and Russia will bolster our international relations and give us more room to grow, expand, and become more rooted as we get to know ourselves better as a nation in a community of nations," he added. In a Pulse Asia survey from March 15 to 20 using face-to-face interviews among 1,200 adults, it showed most Filipinos cannot trust China, with 63 percent, and Russia, with 56 percent. As for China, distrust is the prevailing sentiment toward the country in every geographic area: 68 percent in the National Capital Region; 70 percent in Luzon; 54 percent in Visayas; and 53 percent in Mindanao. Distrust is high among socio-economic classes: 69 percent in Classes ABC;63 percent in Class D; and 63 percent in Class E. Russia records majority distrust ratings in the rest of Luzon (60 percent), the Visayas (62 percent), and all socio-economic classes (54 percent to 61 percent), while it posts a bare majority trust score (51 percent) in Metro Manila and Mindanao. Duterte previously declared he was distancing from the US, while he wanted to further improve alliances with China and Russia. Duterte is set to embark on his second trip to China this month and he will visit Russia also this May. In the same Pulse Asia survey, it showed Japan was among those countries that most Filipinos have been trusting. Japan received 75 percent, next to the United States, which got 79 percent. Australia was considered as the third trustworthy country with 69 percent, followed by Great Britain/United Kingdom, with 53 percent. (Celerina Monte/DMS)