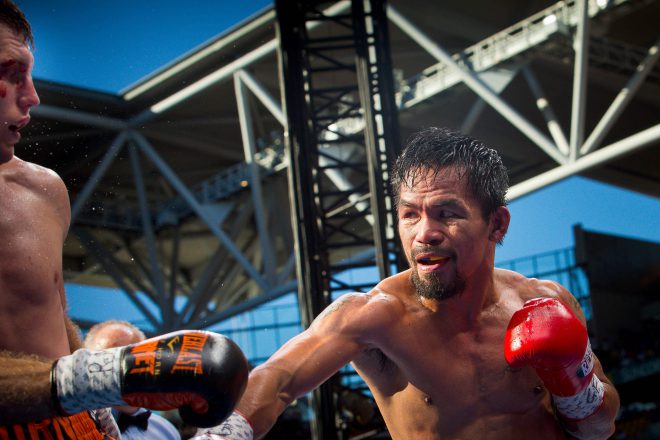 Palace leads parade of consolers to Pacquiao for boxing loss

Malacanang said on Sunday that Manny Pacquiao, despite losing the World Boxing Organization (WBO) welterweight bout by unanimous decision, remained as the Philippines’ “national treasure”. “Nothing will change: Senator Manny Pacquiao will remain our People’s champ, Pambansang Kamao and National Treasure in Global Sports,” Presidential Spokesperson Ernesto Abella said in a statement. He added that Pacquiao’s loss against the Australian boxer Jeff Horn will not “diminish the honors he bestowed to the people and to the flag.” Abella also thanked Filipinos for their full support for the boxer. Vice President Leni Robredo, in a statement, said: “ Manny's loss today will be a disappointment to many Filipinos, particularly those loyal fans who have cheered him on and have been inspired by him throughout his career. But every loss is also an opportunity to get back up -- this has been the story of Manny Pacquiao, as it has also been the story of millions of other Filipinos.” Armed Forces of the Philippines spokesman Brigadier General Restituto Padilla said though it is heartbreaking, “the fight exhibited the true heart of a champion.” Pacquiao has the rank of lieutenant colonel in the Army. “Senator Manny's lost to a much bigger and ungentlemanly aggressive Jeff Horn exhibited the fighter in him and Manny remained a clean fighter all throughout. That sets him apart from all the rest,” he added. “Pacquiao fought with such passion and fervor that characterized the Filipino indomitable spirit,” Col. Edgard Arevalo, AFP public affairs chief said in a statement. “Manny Pacquiao may have lost his belt in the 12-round bout to Jeff Horn, but he retained the love, respect, and admiration of Filipinos as their icon of resilience. Ready to face anew any adversity or life's misfortune,” he added. Philippine Army spokesperson Lt. Col. Ray Tiongson said Pacquiao did his best but the Australian turned out to be the better fighter. “Despite the loss, he remains to be an inspiration to our troops for the courage that he has been demonstrating every time he fights in the ring,” he said. (Ella Dionisio/DMS)