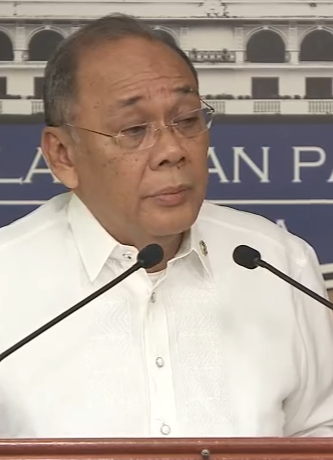 Malacanang said on Thursday the impeachment complaint filed against President Rodrigo Duterte by a party-list congressman is part of a "larger scheme" to destabilize the administration. In a press briefing, Presidential Spokesperson Ernesto Abella said the video message of Vice President Leni Robredo before the United Nations, criticizing the alleged extrajudicial killing, "seems too well coordinated as to just be coincidental." But he insisted Duterte did not commit any act, which could be a ground for his impeachment. "First and foremost, no treason, betrayal of trust, bribery, graft and corruption, high crime and culpable violation of the Constitution has been committed," he said. "We reiterated that the so-called extrajudicial [killings] are not state-sponsored and the President has made sure that he will not turn a blind eye to all uniformed personnel who violate and abuse their power," he added. Abella said no one is truly above the law, not even Duterte, "but the administration upholds due process and is ready for the consequences of its actions that takes consideration above all the interests of the Filipino people." "However, having said that, it does seem like part of a larger scheme of things," Abella stressed. Magdalo Representative Gary Alejano filed on Thursday the first impeachment complaint against Duterte for the alleged culpable violation of the Constitution, bribery, betrayal of public trust, graft and corruption, and other high crimes. Top government officials said Alejano’s impeachment will not prosper and House Speaker Pantaleon Alvarez called it “stupidity.” But Alvarez said the impeachment complaint will undergo the prescribed procedure in the House of Representatives. In a statement, Justice Secretary Vitaliano Aguirre II said:” The impeachment complaint has no factual and legal basis. The allegations in the complaint are not anchored on concrete solid evidence that would support findings of any of the enumerated grounds for impeachment.” Solicitor General Jose Calida said Alejano is acting like a “puppet” of Senator Antonio Trillanes IV, a known critic of the president. “They are not even in the league of Don Quixote so this impeachment won’t fly. It will crash like a rudderless plane flown by witless pilots,” Calida said. (Celerina Monte/DMS)