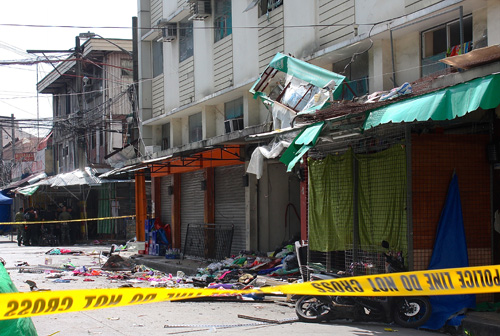 Palace tells public to be alert after Quiapo blasts

Malacanang asked on Sunday the public to be vigilant and report to authorities any suspicious activity following the twin explosions in Quiapo, Manila, killing two people and injuring six others. "We are saddened by the loss of lives brought by yesterday’s night explosions in Quiapo," Presidential Spokesperson Ernesto Abella said in a statement. The Palace also wished for the immediate recovery of those who were wounded. "While investigation is now ongoing, we ask the public to remain alert and immediately report to authorities any suspicious activity or movement," Abella said. He also urged the people to refrain from forwarding news from unverified sources that may cause undue alarm and panic. The blasts in Quiapo on Saturday took place about a week after similar incident happened in the same area where 14 people were injured. Authorities were quick in saying that the first explosion was not related to the country's hosting of the 30th Association of Southeast Asian Nations Summit held on April 29. (Celerina Monte/DMS)