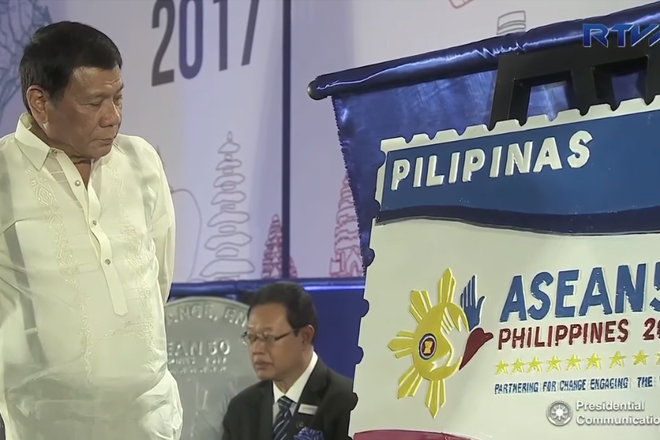 President Rodrigo Duterte sought on Sunday the cooperation of the Filipinos, the member countries of the Association of Southeast Asian Nations (ASEAN) and its dialogue partners as the the Philippines formally launched its chairmanship of the regional bloc this year.

Attended by the representatives from the ASEAN, members of the diplomatic corps, and government officials, Duterte led in Davao City the ceremony for the Philippines' assumption of ASEAN chairmanship, coinciding the 50th founding anniversary of the nations' group.

"Indeed, as chair, the Philippines has an important leadership role to play.  But we recognize the truth that the success is defined by the collective work of our nation and in ASEAN’s entire membership," he said.

In this journey, Duterte asked all Filipinos to "take active and constructive part" during the Philippines' chairmanship of ASEAN.

He urged them to show the spirit of "bayanihan" or cooperation during "this crucial time."

Duterte also called on the nine other ASEAN member states to "rededicate themselves" and commit anew to the principles and purposes behind the establishment of the group's adherence to the rule of law.

"Now, more than ever, it is ASEAN’s spirit of community that will enable us to overcome challenges that we face as a region," he said.

Duterte also urged the ASEAN Dialogue partners to renew their dedication to the valued purposes and principles stated in the Treaty of Amity and Cooperation, "including non-interference, in promoting regional peace and stability through abiding respect for the rule of law."

Foreign Affairs Secretary Perfecto Yasay Jr , in a separate speech, said ASEAN is a "force to reckon with."

"My dear friends, ASEAN, with its diverse cultures and history, has proven to be the power of unity, solidarity and cooperation. Today, ASEAN is a major bloc of 10 countries and a force to respect and reckon with," he said.

He said the ASEAN is an "economic powerhouse," citing that it is the third biggest market in the world with a gross domestic product that is third in Asia and the seventh largest in the the world and a region that has attracted around $120 billion in foreign direct investments.

During the Philippines' chairmanship, 118 meetings will be held in different cities in the country.

The ASEAN 2017 theme is "We Are Partners for Change, Engaging the World."